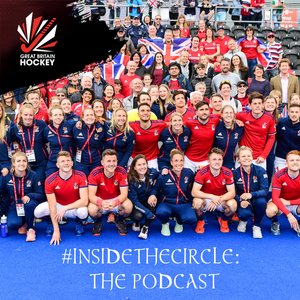 Inside The Circle: The Podcast

Get to know GB Hockey's athletes better than ever before with our brand new podcast!

Get to know GB Hockey's athletes better than ever before with our brand new podcast!

END_OF_DOCUMENT_TOKEN_TO_BE_REPLACED

Read more
Andy Halliday, George Pinner and Adam Dixon return for the series finale of #InsideTheCircle: The Podcast - brought to you by our principle partner Vitality - and a second look into the role of a Team Manager.

Listen in to hear more hilarious, fascinating and heartwarming stories about Royal visits, terrorist threats and the Olympics as well as the importance of wearing the correct undershorts at all times.

Read more
Whether it's re-arranging slightly awkward room-sharing scenarios, running the subs bench or making sure all the players are back on the field after half-time, there's seemingly no end to the list of jobs a team manager undertakes.

Joining us for the first episode in a two-part special is GB men's team manager Andy Halliday as, alongside George Pinner and Adam Dixon, he recalls just some of favourite his memories from 15 years in the role.

With a mixture of hilarious tales combined with some truly touching testimonies from George and Adam about how important Andy is to the team, this is an episode you really won't want to miss.

Having been appointed in 2019, Harry and Amy discuss what it's been like having a full-time goalkeeping coach and the impact he's had on them. There are also stories of Hicko's unusual first meeting with Amy, why the 2004 Olympic champion never compares himself to current goalkeepers, mastering the art of communication and much more.

Read more
This week's episode of #InsideTheCircle: The Podcast sees GB's Hollie Pearne-Webb and Ollie Willars joined by Emma Mitchell to discuss the role of a Performance Lifestyle Adviser.

From helping athletes develop skillsets outside of hockey to finding employment alongside playing the sport professionally and helping them transition out of the game, find out about Emma's crucial work and how it impacts on the players both on and off the pitch.

Read more
#InsideTheCircle: The Podcast - brought to you in conjunction with Vitality - is back for a second season!

Over the next five week's we'll be taking an in-depth look into the relationships between GB's athletes and some of the backroom support staff, uncovering the great work they do and how they help make each player the best person they can be on and off the pitch.

In our opening episode, Liam Sanford and Brendan Creed are joined by performance psychologists Katie Warriner and Tim Pitt.

Read more
Exactly four years on from their incredible triumph at the Rio 2016 Olympics, Georgie Twigg & Nicola White join guest presenter Emily Defroand to look back on those memorable two weeks. Discover how they nearly missed one match due to the bus taking a wrong turning, why Georgie's mum nearly got into a fight in the stands & the moment they knew they were going to win gold.

Read more
Ellie Rayer & Giselle Ansley join us once again to complete our look back at the 2018 Vitality Hockey Women's World Cup. This time round they discuss stepping out in front of 10,000 fans for the first time, celebrating milestones & go through each of the games England played at the tournament.

Read more
Exactly two years on from England hosting the 2018 Vitality Hockey Women's World Cup, Giselle Ansley & Ellie Rayer join us to look back on that incredible event. In this first episode they discuss biscuit hoarding in the hotel, getting lost on the way to the kit launch and much more.

Read more
Joining us this week are best mates Alan Forsyth and Chris Grassick. They discuss their times playing together for Surbiton, Scotland and Great Britain, recalling eating nothing but microwave pasta for five days in Hungary, being accompanied by armed guards whilst having a coffee in India, posing for photo with babies and dogs in Glasgow and much more.

7: Series 1, Ep. 7 - Lockdown Inspiration For The Next Generation

Read more
This week we are joined by Ian Sloan and Rhys Smith as they discuss how they've been continuing to inspire the future during lockdown. They chat about setting up their own companies, hosting virtual sessions, the influence of video games and how coaching has reminded them why they love hockey so much.

Read more
Emily Defroand and Anna Toman return for a second episode as they discuss living together, their inability to put together flatpack furniture, screaming at Luther and much more!

Read more
Emily Defroand and Anna Toman discuss the unusual circumstances that surrounded their first meeting, how binge watching one TV show cemented their friendship and almost causing Hannah Martin to throw her phone out of a window.

Read more
Dan Fox and George Pinner join us once again to recall some of their favourite World Cup stories. Find out what is their favourite game of all-time, which player forgot their playing shirt before a World Cup semi-final and how they managed to upstage the Australian national anthem whilst sitting in an ice bath.

Read more
This week we are joined by Dan Fox and George Pinner to talk all things World Cup-related. This includes some hilarious room-sharing stories, why George is known as the 'Very Bad Man' and Foxy's unusual call-up to the 2010 World Cup in India.

Read more
For our second episode we are joined by Mark Gleghorne, who explains how his calves became so famous, why he chose hockey over cricket, whether Will Calnan annoys him as much as he seems to on Instagram and much more!

Read more
Join Shona McCallin, Esme Burge & Amy Costello for our first ever podcast episode! They chat about the 2019/20 domestic season, explain how the team has grown under Mark Hager and answer the questions sent in by our supporters. Make sure you stay tuned right to the end too in order to find out why GB Hockey athletes should never be let loose in shops...

Please note: This podcast was recorded several days before government rules on isolation were introduced on 23 March.