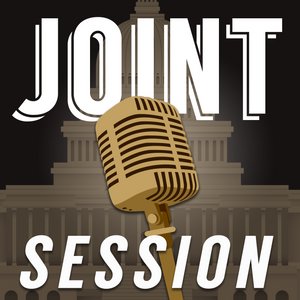 Joint Session with Toc and Tim

Welcome to the Joint Session podcast with Toc and Tim. Brought to you by two guys who have no business having a podcast.

Toc and Tim are coming off a post-Halloween and World Series  hangover to bring you an extra special, extra loose episode LIVE (kinda) from Toc’s apartment. Segments include Weak Sauce, Polling the Dice, Casting Couch, FMB and Jukebox ft. Miguel

Joe Biden Is The Night King (RIP to dat boi)

After a two-week hiatus, the boys are back! Winter is finally here, and Joe Biden is the Night King. What does that mean for the rest of the Democratic Primary? Segments include Polling the Dice, FMB, Dr. Toc's Medical Marvels, Trailer Park ft. AOC, Weak Sauce, Jukebox and a special shoutout to the NFL Draft.

A New Fighter Has Appeared: #YangGang

WTF is a Billie Eilish? Toc and Tim get philosophical this week while burning through all the fan favorites. Segments include Weak Sauce, Blow The Whistle, Polling the Dice, FMB, Newsbrothers and a throwback Jukebox ft. Dido.

Toc and Tim recap the week by talking about Nickelback, Democrats dropping out of the primary, political gambling, Ilhan Omar, Paul Manafort, and the House's new anti-hate bill. Segments include Polling the Dice, FMB, Weak Sauce, Tim's Apartment Hunt and Jukebox. Remember to subscribe and follow us on Twitter (@JointSessionPod) and Instagram (@Joint_Session_Pod).

Another day, another Presidential Debate in the books. This week Toc and Tim run down the latest 3 hour snooze fest and hit all the usual segments: Weak Sauce, Polling The Dice, FMB, He's Just Not That India, Jukebox ft. French Montana, Cardi B, Logic, A$AP Rocky &amp; Juicy J. Also, special shoutout to producer Sagnik Basu, who's going home to India for the next couple of weeks. He will be missed. Pour one out. Text when you get home.

ASMR You There God? It's Me, Margaret

Happy Tax Day! The boys debut TWO NEW JOINTS (News Brothers/ASMR You There God? It's Me, Margaret) and run through the past week from Tim's new apartment. Segments also include Polling the Dice, FMB, Weak Sauce, Minority Report and Jukebox ft. Riit.

Author and Cleveland-based sports journalist Ben Axelrod joins the pod to talk about the start of the MLB season, what it was like knowing Tim in high school, and the ups and downs of having an internet gf/fiancé. Segments include creepy Joe Biden (Polling the Dice), Weak Sauce, FMB, Mueller Madness and Jukebox ft. Jai Wolf.

You came back for Ep2 of Season 3? Damn, that's tight. Toc, Tim, Sagnik, and DaBaby are back AGAIN with some wild stuff going on. Today's topic includes Tim's Road to 10 and other Weak Sauce stuff, Impeach Deez featuring Rudy's thugs, Polling the Dice with a Bernie and Warren cage match on live TV, FMB, India, and a whole lotta other stuff. Ask not what Joint Session can do for you, but rather what you can do for Joint Session. And what you can do is listen to it. Now.

This week, Toc breaks an exclusive, EXPLOSIVE report on the scandalous behavior of one of DC's biggest insiders (Tim). The guys talk and watch the Elite Eight and bang out some fan-favorite segments: Keeping Up With the Obamas, Campaign Casting Couch, Minority Report and Weak Sauce.

SPOILER ALERT: Toc and Tim die in the end, but first they drop a casting couch update, discuss a new Trump conspiracy theory, do some Girl Toc, and hold a double Weak Sauce recap. The boys also debut two new segments, and don't want to miss the last FMB of Season 1. Hold on to ya butts.

A Super Bowl sized-episode covering everything from J-Lo to Iowa and even some Impeachment in-between. Segments include the final edition of Impeach Deez, Polling the Dice, and so, so much more. Toc also gets a promotion at work, which means big things for the Joint Session pod.

Toc and Tim are back (and Sag-daddy too) with your weekly-ish dose of your favorite segments, like Weeksauce, Impeach Deez, Cancel Roulette, and more - all while Datoc returns to form and  houses some of his homemade hummus.

Toc and Tim are back for Season 2 of everyone’s favorite podcast. This week they introduce producer Sagnik Basu, recap their Hot Girl Summers and set the tone for Fat Guy Fall. Segments include Weak Sauce, Polling the Dice, Casting Couch, Newsbrothers, Turd Party Candidate and a Juke Box ft. Post Malone. Make sure to click subscribe to get notified as soon as a new episode goes live. And follow us on social media: Instagram: @Joint_Session_Pod Twitter: @JointSessionPod

I Just Took A CBD Test

The boys keep Season 2 rolling and revisit some familiar segments (Weak Sauce, Polling the Dice, FMB,  Trailer Park, Trust Me - My Dad’s a Doctor) on a short week of planning. Turns out, Tim and Toc are 100% that pod.

© 2020 OwlTail All rights reserved. OwlTail only owns the podcast episode rankings. Copyright of underlying podcast content is owned by the publisher, not OwlTail. Audio is streamed directly from Toc and Tim servers. Downloads goes directly to publisher.