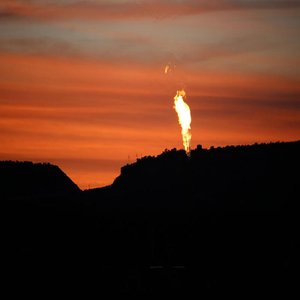 While reporting this series, it's really easy to end up with more voices and moments than can ever be plopped into the four-minute feature stories that air on KUNM . That's why o ver the course of this project, I'll be sharing some of those moments with you online. In December, I met up with Mike Eisenfeld with the San Juan Citizen's Alliance. The alliance is one of the groups that is asking the U.S. Bureau of Land Management to hold off on approving new permits for oil wells until it can study the impact new development will have on water and air, landscapes, and nearby communities. We drove around looking at some of the new wells being drilled in Counselor, New Mexico. These are some of the sights we saw -- and Eisenfeld explains what we're seeing.

In 2014, NASA announced they’d found that the largest plume of methane gas in North America was right here in New Mexico. At the time, scientists didn’t know exactly where the methane was coming from – but now they’ve completed some research and published their findings .

Gas Flaring Does More Than Light Up the Skies

Away from any cities or streetlights, the nights here at Chaco Culture National Historic Park are dark. Looking up, it takes a little longer than usual to spot even the most familiar constellations. That’s because there are so many more stars visible across Orion’s shoulders or surrounding Gemini’s twins.

The Obama Administration recently proposed new standards that would reduce methane emissions from natural gas operations across the country, and environmental advocates say the new rules could have some health benefits for people living near gas wells.

© 2020 OwlTail All rights reserved. OwlTail only owns the podcast episode rankings. Copyright of underlying podcast content is owned by the publisher, not OwlTail. Audio is streamed directly from Tristan Clum servers. Downloads goes directly to publisher.