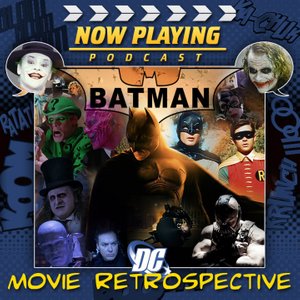 After The Dark Knight broke box office records in 2008 audiences have hotly awaited the next, and final, installment in Christopher Nolan's Batman saga. Now to prepare for that film, Arnie, Stuart, and Jakob are looking back at all the Batman films, from 1966 through a weekend-of-release review of The Dark Knight Rises. Join us each week at NowPlayingpodcast.com to hear our reviews of a new Batfilm!

Since Michelle Pfeiffer squeezed into latex in Batman Returns an idea of a Catwoman movie had been teased. Writers, directors, and stars were attached to the project over the years, and it took over a decade for the film to become reality. Now starring Academy Award winner Halle Berry as Patience Phillips, a woman given the mystical powers of a cat, the film hoped to jump on the superhero bandwagon and launch a new franchise. Instead, it won several Raspberry Awards and tanked at the box office. Is this film as bad as its reputation? Listen to Jakob, Stuart, and Arnie as they let the fur fly in our review!

The Dark Knight Rises, Christopher Nolan's much-anticipated conclusion to his Batman trilogy, opened last Friday under the pall of a senseless tragedy that occurred at a screening in Colorado. Nationwide, people mourn for those lost, and pray for those injured. But the majority refuse to let the acts of one man taint a movie they've waited four years to see, and audiences rushed to theaters and IMAX to see if Nolan's latest effort could measure up to 2008's record-breaking, Academy Award winning The Dark Knight. Listen to Arnie, Stuart, and Jakob's final review in their Batman retrospective series to find out if it did!

The Dark Knight opened under the dark cloud of Heath Ledger's death but went on to break box office records and set a new standard for superhero films and cement Christopher Nolan's A-List status. But why so serious? Listen to Arnie, Stuart, and Jakob's review of this Academy Award winning tale of capes and cowls!

It took eight years after Batman &amp; Robin for the caped crusader to return to theaters with Batman Begins. Directed by a cult director with only two studio films to his name, starring an actor best known for extreme roles in small films, and released in a summer dominated by lightsabers, Batman Begins burst onto the scene and changed the public perception of what a superhero film can be. Now listen to Arnie, Stuart, and Jakob's review of Batman Begins as we lead up to Nolan's final film in his Batman trilogy--The Dark Knight Rises!

Batman will return! In the meantime, join us at nowplayingpodcast for our current retrospective series -- Spider-Man!

For over a year the hosts of Now Playing have watched and reviewed every movie based off a Marvel Comics series, but now they enter into their last Marvel review series with the most popular Marvel Comic character of all time -- Spider-Man! Join us as we watch and review all the Spider-Man movies from the 1970s made-for-TV films through the 2012 Amazing Spider-Man reboot!

After Batman Forever exceeded expectations, a sequel was rushed into production. Trouble on the set led to Val Kilmer being replaced by TV superstar George Clooney, but the real star power was held by the film's villain--Arnold Schwarzenegger as Mr. Freeze. And this film brought even more superhero star power, with more super heroes and super villains than any previous Batman movie, including Robin, Poison Ivy, Bane, and even Batgirl! The film was not well received and put Batman on ice for eight years, but Arnie, Stuart, and Jakob have thawed it out for the next installment of their Batman retrospective series. Is this ice nice? Listen to find out!

After Tim Burton's Batman returned to diminishing results, audiences put off by the salacious Penguin and dark tone, Warner Bros. brought in Lost Boys director Joel Schumacher to give Batman a new vision. With Val Kilmer now the man behind the cowl, Gotham City was given a new look, a new hero in the form of Robin the boy wonder, and two new villains. Batman Forever came in only second to Toy Story at the 1995 box office, but was it as big a hit with the Now Playing reviewers? Listen to find out!

Batman : Mask of the Phantasm

When Batman was a huge success in 1989 a new Batman animated series was immediately approved, but due to the production time of animation it did not premiere until 1992. With a heavy dose of Tim Burton's gothic style but a mood more loyal to the original comics, allowing for such baddies as Clayface and Harley Quinn to fit alongside Joker and Penguin, Batman : The Animated Series was a huge hit reaching outside the normal after-school cartoon demographic to Batman fans of all ages. With the series' success, an original animated feature film got promoted to the big time--a theatrical release. So on Christmas day, 1993, Batman : Mask of the Phantasm became The Dark Knight's fourth appearance on the silver screen. Featuring Mark Hamill as the iconic voice of Joker and Kevin Conroy as Batman both fighting against a new, lethal vigilante The Phantasm, does this animated film actually supersede Burton's live-action films? Listen to Stuart, Jakob, and Arnie's review to find out!