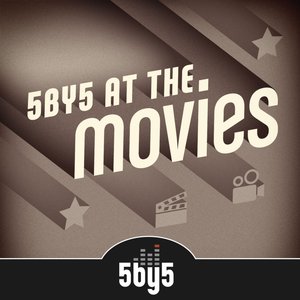 5by5 at the Movies

The latest in movie news, reviews, and gossip - delivered weekly! Special guests, top 5 lists, and all the film-themed shenanigans your ears can handle! Hosted by Keith Ruckus.

This week is filled to the brim with Marvel news! Feige's new role and plans, 'Deadpool' things, and Guardians 3 obviousness. PLUS Jason Mamoa and Zoe Kravitz are related and that's pretty rad, NPH's weirdest casting, and Elon Musk REALLY likes 'Space Jam.' PLUS and interview with Alexandre Philippe - director of "Memory: The Origins Of Alien" Co-host: Dan Richardson

This week the bad boys of butt jokes are back! The normal show you've grown to love but not review on iTunes! We're talking about Margo Robbie being Barbie in the new slate of films based on the doll, the upcoming "Lorena" doc-series from Jordan Peele's production company, and the amazing title of Bad Boys For Lif3! Plus: BIRDBOX! BANDERSNATCH! AND MORE! Guest: Writer, filmmaker, comedian, genius, and gentle lover - OWEN EGERTON. Listen to this amazing, beautiful, human being spread his wisdom all over Keith's life. Co-host: Mason "Bad Boys For Lif3" Scheer

This week we talk about Gwyneth Paltrow's Rescue, Freddy Kruger gossip, the best on screen Steve Austin - and more! Special Guest: Nakia! Straight from season one of The Voice - one of the best musicians in Austin, Tx! Co-host: Mason Scheer

This week we chat news on 'Bill &amp; Ted', 'Power Rangers' and that indie darling 'Rise of Skywalker' coming out soon. Plus what we really think about 'Cats'! Co-host: Dan Richardson

This week is chock full of the news you love! We dissect wether or not John Turturro's upcoming sequel is a good thing or not. Talk about Netflix's 'Murder Mystery', the bombing of the new 'Men In Black', and how the proof of 'Bill &amp; Ted' happening is important to us. PLUS: The best rant about 'E.T. The Extraterrestrial' you've ever heard! Co-host: Dan Richardson

This week the boys talk about the future of the film industry! Are streaming services surpassing theaters? How many films is too many for Netflix to put out? Also - hot takes from Mason on the 'Sonic The Hedgehog' film, Great British Bake-Off, and why he doesn't care about YA movies. Keith talks about 'Lady And The Tramp' with real dogs, why he's excited for the upcoming 'Joker' film, and we all learn a little about CAWFEE. Guest: Award Winning Filmmaker Christopher F. Todd Co-host: Mason Scheer

This week we get political AF! We chat about the Golden Globes massacre with Ricky Gervais, Harvey "Walker" Weinstein, and much more! Plus "Batman" news, how much money Disney is bringing in, some Kevin Smith nuggets, and why oh why are we getting a 4 hour "Once Upon A Time in Hollywood". ALSO - tons of "Rise of Skywalker" stuff. Co-host: Dan Richardson

This week we dive into a PLETHORA of news including a goodbye to Stan Lee, upcoming thoughts on Detective Pikachu, Toy Story 4, and the reboot of Child's Play. And that's just half of it! Plus we finish our interview with Doug Benson AND we get heated talking about popcorn and the Oscars! Co-host: Mason Scheer

This week we talk about sneaking rotisserie chicken into theaters, spider-verse news, Hugh Jackman rumors, more info from the 'Child's Play' reboot, and we talk about Netflix's upcoming Roald Dahl universe. PLUS we debate if the new 'Lion King' is live-action or not. Guest Host: Professional Wrestler A.C.H. Co-host: Mason Scheer

This week we FINALLY dive into the mail bag with two whole friends writing in! We talk about how the show is hitting the charts, and we throw in a non-spoiler review of 'Yesterday'! News about "Mulan", "Stuber", "Joker", "Red Notice", and MORE! Most importantly - we talk about what a REAL Ariel The Mermaid should be.... IMAGINARY. Co-host: Dan Richardson

Rise and shine campers, it's news time! We chat about the new WB CEO Anna Sarnoff, current movies in production, why the world doesn't need 'Space Jam 2' and we dip into the mail bag! Plus all the James Gunn updates and what exactly do you get with the 'Avengers: Endgame Bring Back." Co-host: Dan Richardson

This week we talk seriously about everything that's going in in the world. How that effects movies. And how we're dealing. Also, where's Bryan? Co-host: Dan Richardson

This week we review "Sonic: The Hedgehog" and "Harley Quinn: Birds Of Prey." Plus a TON of movie rumors, upcoming reboots and sequels, and for some reason: A lot of talk about "Quantum Of Solace" and "Jurassic World: Fallen Kingdom" Co-host: Dan Richardson

This week we chat about all the 007 controversy, Taika Watiti coming back for more "Thor", and "The King's Man" trailer. PLUS - what the heck is going on with all this "Power Ranger" news, "Supersize Me 2", some "Shazam" stuff, and MORE! Guest - Owen Egerton. We talk about his new podcast "The Horror"! Fans of the dark cinema rejoice! Also - we get really maudlin in our conversation. Co-host: Dan Richardson

This week's top box office is causing concern! Will "Onward" be Pixar's next "The Good Dinosaur"? Plus Vin Diesel's muscular foot and why it's sitting in his mouth, friend of the show Stephen Lang's Avatar predictions, and what other film is getting the "No Time To Die" treatment. AND - Special returning guest: OWEN EGERTON! This time it gets weird! Co-host: Dan Richardson

Some quick news items this week about "Rise Of Skywalker" and some Feige things... but most importantly: OUR REVIEW OF CATS. Co-host: Dan Richardson

This week enjoy news about the upcoming 'Sesame Street' movie, 'Ghostbusters' rumors, the '3 From Hell' trailer and more! PLUS our hot takes on 'Dark Phoenix'! Co-host: Dan Richardson

This week is full fo DC news, some rumors about "Dolittle", and some more Bidet talk. PLUS Oscar Issac surprise casting, Catwoman stuff, and what our favorite GOOP scent is. Co-host: Dan Richardson

This week we talk the BIG headlines like Harvey Weinstein's just desserts, The mix up at the top in the Mouse House, and eventually some movie news. Plus Keith talks about his recent trip to Galaxy's Edge. Co-host: Dan Richardson

© 2020 OwlTail All rights reserved. OwlTail only owns the podcast episode rankings. Copyright of underlying podcast content is owned by the publisher, not OwlTail. Audio is streamed directly from 5by5 servers. Downloads goes directly to publisher.