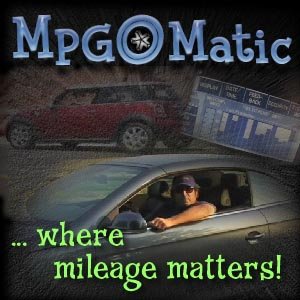 MPGomatic.com takes aim at the automotive issues that matter most today. We tackle the topics and produce real world car reviews that focus on mileage, performance, driveability, and audio integration. Whether it's reporting on cutting edge plug-in electric cars and fuel efficient clean diesels, or getting the most mileage out of old paint, we're here to cut through the fluff and bring forth the truth. MPGomatic.com ... where mileage matters!

MPGomatic puts a "gotta have it green" Mustang V6 Premium to a grueling road test.

The VW Beetle TDI is the most fuel-efficient - and only diesel - convertible sold in America today. MPGomatic put a six-speed manual-equipped TDI Bug to a grueling cold-weather test drive.

MPGomatic.com puts the 2013 Chevy Suburban to the "take your kid to college" test, packing the cargo area full, and taking to the open road for a 700+ mile roundtrip. The half-ton Chevy Suburban 1500 is equipped with a FlexFuel 5.3-liter V8 engine producing 320 horsepower and 335 foot pounds of torque. The Vortec V8 is mated to a six-speed electronically controlled automatic transmission.

MPGomatic.com puts a 2013 Scion FR-S to a grueling 300+ mile test drive. The 2013 Scion FR-S is powered by a direct and sequential multi-port fuel injected DOHC 2.0-liter Boxer (horizontally opposed) four-cylinder engine - codeveloped by Toyota and Subaru - that produces 200 horsepower (HP) and 151 foot pounds of torque. The rear-wheel-drive (RWD) FR-S is available with a six-speed manual or automatic transmission. We tested the six-speed automatic version. Of course, we'd prefer to drive the six-speed manual, but you gotta take what you can get, when you can get it. This review video features an alternate 0-60 MPH run that drops the time into the mid-sevens.

MPGomatic.com puts a 2012 Toyota Prius C to a MPG road test. How many miles per gallon can we coax out of Toyota's least expensive hybrid? This is like no other review on the planet.

MPGomatic.com puts a six-speed manual 2013 Hyundai Veloster Turbo to a grueling 500+ mile test drive. We switched things up a bit with this review, and have included a demo of the Blue Max and Eco-Coach features along with our usual 0-60 MPH and fuel economy testing. It's in HD, as well. :) Big screen and Big MPGs, woo hoo! The Hyundai Veloster Turbo is equipped with a turbocharged 16-valve Dual-CVVT 1.6-liter inline four-cylinder engine producing 201 horsepower and 195 pound feet of torque. The intercooled and gasoline direct-injected (GDI) four banger cranks out more than sixty HP and seventy pound feet of torque over the naturally-aspirated 2012 Veloster we tested earlier this year. A six-speed manual transmission is standard in the Veloster Turbo, while a six-speed automatic is optional. 2013 Veloster Turbo M/T MSRP: $23,950 Options: Ultimtate Package - $2,500 Carpeted Floor Mats - $95 Michelin Pilot Super Sport 215/40ZR18 Summer Tires - $1,200 Inland Freight and Handling - $775 MSRP including options: $26,520 More MPGomatic ... Website: http://www.MPGomatic.com Twitter: https://www.twitter.com/#!/MPGomatic Facebook: http://www.facebook.com/MPGomatic

MPGomatic.com drops the hammer on a 2012 Hyundai Accent for a 0-60 MPH acceleration test.

MPGomatic.com test drives the new 2013 Acura ILX 2.4, Hybrid, and 2.0. Please note: this segment was shot at a first drive media event and is not a full review.

MPGomatic.com puts the 2012 Chevy Sonic LTZ Turbo to an exhaustive week-long test. The Aveo is dead. Long live the Sonic!

© 2020 OwlTail All rights reserved. OwlTail only owns the podcast episode rankings. Copyright of underlying podcast content is owned by the publisher, not OwlTail. Audio is streamed directly from Daniel Gray/MPGomatic.com servers. Downloads goes directly to publisher.