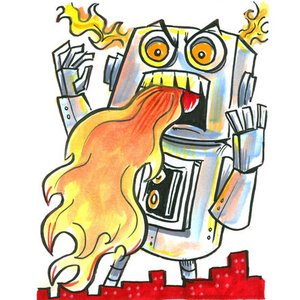 Which mutant superpower is best? Here at GFBR we know the answer doesn't matter, it's getting there that counts. In every episode we'll take apart our current pop culture obsessions to see why they make us tick, with some healthy digression along the way. 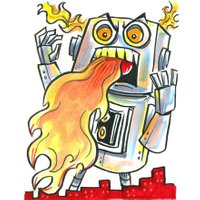 Andrew is joined by Jeannie and Marena to talk about what happens when starship captains stop being polite, and start getting real. (Also, Lego is discussed at length.)

D&D is the new cocktail party

Andrew is joined by Patrick and the Geeky Hostess, Tara Theoharis, to talk about putting together an evening of role-playing games you and your friends won’t soon forget.

Rewatching the Next Generation

Andrew has been rewatching Star Trek: The Next Generation, and gets Patrick and Marena’s opinions on the now-seminal classic.

Adam takes a huge lead in the father of the year race by building a working R2-D2 replica with his kids. Andrew and Marena get the inside scoop on their progress and how he got started in this most awesome of hobbies.

196: Captain America had kind of a big week

Not a hoax! Not a dream! A new episode of Giant Fire Breathing Robot! Jeannie, Patrick, and Andrew discuss the big week Captain America had, the Warcraft movie, and what exactly they’ve been up to in the past year.

195: The Triumph of the Doubleclicks

Chatting about holiday themed commercials turns quickly to nostalgia for Jeannie, Patrick, JD, and Andrew. Happy end of 2014, and we’ll talk to you in the new year! Music courtesy of JD Short (http://bassdbler.com) and Far From Close (http://farfromclose.com)

This episode features Andrew, Jeannie, JD, Patrick, and Marena doing what they do best; and what they do best isn’t very nice. This episode also features chatting about premium whisky, a rap battle (yes, seriously), and of course, the new Star Wars trailer. Because our podcast license would get revoked if we didn’t talk about Star Wars… Music courtesy of JD Short (http://bassdbler.com) and Far From Close (http://farfromclose.com)

Andrew, Jeannie, Patrick, and JD discuss the new Avengers 2: Age of Ultron trailer; Andrew has a(nother) crackpot theory about Cyclops; and good times are general had by all. Music courtesy of JD Short (http://bassdbler.com) and Far From Close (http://farfromclose.com)

Thadeous C joins Andrew, Jeannie, and Patrick to discuss the upcoming Extra Life charity event. Tune in to the official D&D and/or ASTRO Gaming Twitch channels on Friday, October 24th at 6:30 PM Pacific time to see Thadeous and Andrew play in a special Dungeons and Dragons adventure. You’ll have a chance to win some pretty cool swag, and your donations and interaction via chat or Twitter during the game will also be able to influence the outcome of the events at the table. What’s not to love?! Speaking of donations, you can donate money to the hospital that saved Andrew’s life when he was but a wee lad, Riley Hospital for Children in Indiana. Even better: your money will count twice, as Andrew has pledged to double all donations for the first $1,000 donated via that page! Why not hit him in the wallet and get your friends and family to chip in $5 or $10 bucks wherever they can? It’s tax-deductible, and for a truly good cause. (Also don’t worry: in this episode, the crew talks about The Flash, Gotham, X-Men, and all the other nerdy stuff you’d expect.) Music courtesy of JD Short (http://bassdbler.com) and Far From Close (http://farfromclose.com)