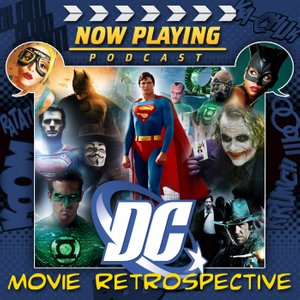 Join Arnie, Stuart, and Jakob as they watch the theatrical adaptations of Superman, Batman, Green Lantern, Swamp Thing, and all the other heroes, and not-so-heroic characters, that originated in the pages of DC Comics

The Return of Swamp Thing

In 1982 DC's Swamp Thing seemed ready for the big time with a major motion picture. But with that original film failing to grow on audiences, it would actually be in 1983 that Swamp Thing blossomed--as new writer Alan Moore took over and revamped the character. With the newfound popularity for the man-plant hybrid a new, low budget film was commissioned and released in 1989. Does The Return of Swamp Thing bear fruit, or is it another rotten comic adaptation? Listen to the Now Playing review to find out!

By 1980 Superman had proven audiences of all ages could watch in wonder as comic books came to life on the big screen. But the next DC hero on the big screen wasn't Batman, Green Lantern, or even Aquaman, it was Swamp Thing. The film was directed by Wes Craven and starred James Bond baddie Louis Jordan and scream queen Adrienne Barbeau. It did not find box office success but did lead to a sequel, a TV series, and a cult following. Did the film just need time to bloom, or did it wither on the vine? Listen to Now Playing's latest DC Comic movie review to find out!

Bruce Willis, John Malkovich, and all their surviving operatives get a sequel in their sixties with RED 2. Do newcomers Anthony Hopkins and Catherine-Zeta Jones inject fresh blood into this franchise, or has the joke gotten too old even for this crew? Listen and find out.

80s action star Bruce Willis may have gotten older, but he's still considered RED - retired and extremely dangerous. Do Jakob, Stuart, and Arnie have a laugh watching senior citizens strap on pistols to blow holes in the CIA's rep, or is this AARP action-comedy D.O.A.? Listen and find out.

Comic book vets Chris Evans and Idris Elba have joined THE LOSERS - a ragtag band of mercenaries out to punish CIA baddie Jason Patric for a failed Bolivian mission. Should Avatar babe Zoe Saldana trust these C-stringers to get the job done, or should she just call the A-Team? Listen and find out.

Has sweet little Natalie Portman been palling around with terrorists? A masked swashbuckler known only as V For Vendetta hopes she'll help him rescue future London from dictators, but has Wachowski script tinkering disfigured this classic Alan Moore comic book as well? Listen and find out.

A History of Violence

Viggo Mortensen looks like an unassuming small town diner owner, but to a crew of Philly hoods he's a thug with A History of Violence. Does director David Cronenberg split opinion in his radical reworking of the graphic novel? Listen and find out.

Tom Hanks is a cold blooded killer heading down the Road to Perdition, hoping to deliver his son from Irish mobsters he once considered family. Has director Sam Mendes made a comic book Godfather, or is this an offer that Jakob, Stuart, and Arnie easily refuse. Listen and find out.