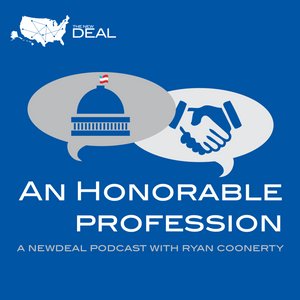 An Honorable Profession: a podcast that features rising Democratic leaders, brought to you by the NewDEAL and featuring host Ryan Coonerty. Leaders share their personal stories, and discuss ways to restore trust in government, as well as sanity in politics, in an insane era. Follow us on Twitter @newdealleaders, Instagram @anhonorableprofession, and facebook.com/NewDEALLeaders/

Elena Parent Is on the Frontlines in Georgia

Host Ryan Coonerty talks with Maricopa County (AZ) Recorder Adrian Fontes, who is working to make elections more voter-centric in the nation's 3rd largest voting jurisdiction after surprising himself in 2016 by running for office - and winning.

Greg Fischer Is Building a Culture of Compassion and Innovation

Host Ryan Coonerty talks with Louisville Mayor Greg Fischer about the importance of compassion for a city's success, as well as the strength required to have compassion. Mayor Fischer also discussed how his background as an entrepreneur and inventor influences his work as a mayor, and his belief that mayors must have the head of a CEO and the heart of a social worker.

Eric Lesser Rolls Up His Sleeves in Massachusetts

Host Ryan Coonerty talks with Massachusetts State Senator Eric Lesser about collaborative innovation, his experience with national politics, and how to support communities at the local level.

Host Ryan Coonerty talks with San Jose, CA Mayor Sam Liccardo about his leadership in the heart of Silicon Valley and his work to embrace technology while also ensuring his community is on the forefront of adapting to the rise of new technology and disruption.

Mandela Barnes Focuses on Equity in the Environment and More

Host Ryan Coonerty talked with Wisconsin Lieutenant Governor Mandela Barnes about his path to politics after college, the importance of an authentic connection with a wide variety of communities and individuals, and his work advocating for equity in environmental policy, education, criminal justice, and other policy areas.

Host Ryan Coonerty talks with Nebraska State Senator Kate Bolz about her run to flip Nebraska's first Congressional district and her leadership in health care, education, and supporting the businesses that keep her district strong.

Host Ryan Coonerty speaks with St. Louis, MO Treasurer Tishaura Jones about her work to invest in her city's children and their future, her time in Missouri's state legislature, and her experience running her first campaign in 2008 as a new mother.

NewDEALers in Colorado Are Leading the Way

Amanda Edwards Is Making Houston a City of the Future

Host Ryan Coonerty speaks with Houston Councilmember Amanda Edwards on working to empower people and change the direction of her city, service as a way of life, and being a politician who doesn't like politics.

Steve Benjamin - The Mayor of Mayors

Lauren McLean Puts the Environment at the Center of City Decisions

Host Ryan Coonerty talks with Boise City Council President Lauren McLean about her work to guide Boise's growth as a vibrant city, understanding how climate affects every aspect of life and ensuring that the city's economy and development is ready to adapt to modern circumstances.

Host Ryan Coonerty talks to Oregon Treasurer Tobias Read, and we find out what happens when we give a smart progressive a billion dollars to manage.

Host Ryan Coonerty talks with Iowa Senator Liz Mathis, New Hampshire Senator Jon Morgan, and Nevada Assemblyperson Daniele Monroe-Moreno about their states' upcoming primary elections Mathis, Morgan, and Monroe-Moreno discuss the benefits and drawbacks to early primaries, such as allowing candidates ample time to meet with voters, particularly those from rural populations. They also reflect on the results of the 2016 primary election and stress the importance of a unified Democratic vote as they talk about the keys for candidates to be successful there both in the primary and general elections.

Steven Reed reflects on a historic and inspiring victory in Montgomery

Host Ryan Coonerty talks with Mayor Steven Reed about his historic campaign to become the first African-American leader of Montgomery Alabama. They talk about how to run a successful modern campaign at the local level, combining traiditional retail politics and analytics, as well as how to inspire people in an era when so many people are cynical about politics. Mayor Reed also describes his focus on education and a more vibrant economy as works to invest in the city's future.

Host Ryan Coonerty talks with historian Douglas Brinkley, author of "American Moonshot", in a special episode on the space race, one of the great moments of American ingenuity and ambition, and how public leaders can find inspiration from this initiative as we face major challenges like climate change.

Host Ryan Coonerty talks with Ian Kahn, who played General George Washington on AMC's Turn and who is now dedicating himself to American politics and supporting the renewal of political leadership in the model of General Washington and the historic forefathers of democracy.

Nevada Attorney General Aaron Ford talks with host Ryan Coonerty about his journey from poverty to the AG's office, his work to help working class families, and what candidates need to do to win in Nevada in 2020

Host Ryan Coonerty talks with Vice Chair of the Exeter, New Hampshire Select Board, Molly Cowan, about issues facing her New England city, including "brain drain," an aging population, and their impact on the state economy in New Hampshire Cowan provides solutions, including around promoting immigration, and focuses on local issues affecting her constituents, such as healthcare and the need for education and increased job training Cowan also discusses the differences between state and national politics and provides insight on the best practices for the upcoming primaries in New Hampshire and in other New England states

© 2020 OwlTail All rights reserved. OwlTail only owns the podcast episode rankings. Copyright of underlying podcast content is owned by the publisher, not OwlTail. Audio is streamed directly from The NewDEAL servers. Downloads goes directly to publisher.