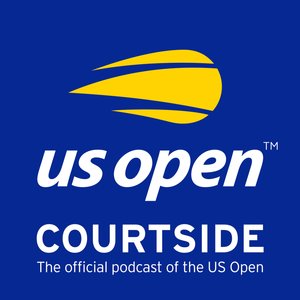 Courtside: The Official Podcast of the US Open

Courtside is celebrating 50 years of the US Open in 2018! Host Nick McCarvel and renowned tennis historian Steve Flink take us through the 2018 tennis season and count fans down to the US Open. Courtside is a USTA production in association with audioboom.

The quarterfinals are here, join us for a preview of the matchups on Day 9. We also talk with USTA Boys’ 18s National Champion Jenson Brooksby. AND check out our FUN interview with the great Michael Chang.

Luck was on our side as we spoke to John Isner midway through his run to the Masters 1000 title in Miami, the biggest win of his career. Then Steve Flink visits with Owen Davidson, who -- as part of a fascinating tennis life -- holds the distinction of winning the first match of the Open Era on April 22, 1968. A fascinating look back at an important date in tennis history.

Spring has sprung with USTA president Katrina Adams! She fills us in on Net Generation, how tennis is in full bloom after a rough winter – and what to expect in August at the US Open. We also continue our celebration of the 50th anniversary of the US Open with Tony Trabert, a champion of the sport both on and off the court.

As we continue our celebration of 50 years of the US Open, legendary TV announcer Cliff Drysdale recounts his tennis life on the court and as an early organizer of the pro game. We also visit with 1994 US Open champion Arantxa Sanchez-Vicario as well as U.S. teen sensation CiCi Bellis.

Nick McCarvel talks to Jim Courier, the US Davis Cup captain fresh off working as a TV announcer at the Australian Open. Patrick Mouratoglou, coach of Serena Williams, provides his insight into her comeback. Finally, as part of our continuing celebration of the 50th anniversary of the US Open, Steve Flink sits down for a conversation with 1968 champion Virginia Wade.

3: Serena's Comeback and the Legacy of Whirlwind Johnson

Serena Williams played her first competitive match in 13 months as the U.S. Fed Cup team defeated The Netherlands Feb. 10-11. Nick McCarvel offers insight into her comeback plus you can hear Serena and sister Venus discuss their weekend on court. We then continue our celebration of the 50th anniversary of the US Open – while also celebrating Black History Month – by exploring the amazing legacy of Dr. Robert "Whirlwind" Johnson. Steve Flink talks to author Doug Smith and Lange Johnson, grandson of the man who enabled the careers of Althea Gibson and Arthur Ashe.

TODAY host Savannah Guthrie dishes to Nick McCarvel on her Roger Federer obsession ahead of playing him in the Match for Africa charity event March 5 in San Jose. Steve Flink joins Nick to preview Indian Wells and Miami, and then Steve chats with 1971 US Open champion Stan Smith.

We continue our celebration of the 50th anniversary of the US Open with 1969 champion Rod Laver, the only player to twice achieve the calendar-year Grand Slam, in 1962 and 1969. We also catch up with former World No. 2 Tommy Haas, who takes us behind the scenes in Indian Wells with his role as Tournament Director of the BNP Paribas Open.

We continue our celebration of 50 years of the US Open with Chris Evert, who shares the tale of a legendary tennis life starting with her "Cinderella in sneakers" debut at age 16. Then the outspoken Brad Gilbert talks tennis nicknames, his work with Andre Agassi and much more.

What's better than Madison Keys and Novak Djokovic by daylight? How about Roger Federer and Maria Sharapova under the lights? We preview the entire Labor Day schedule; talk to Eric Goulder, commissioned by the USTA to sculpt the statue honoring Althea Gibson; and visit with Tracy Austin during this 50th anniversary celebration of the US Open!

Let us entertain you! First with a preview of a schedule featuring Rafa and Serena back-to-back on Ashe during the day. Then with a behind the scenes conversation about all the entertainment options -- beyond the tennis -- that make the US Open a world class experience. Finally, we celebrate our 50th anniversary by visiting with three-time champion Ivan Lendl.

Third round action heats up with Roger Federer, Novak Djokovic, Madison Keys and Maria Sharapova headlining the lineup. PLUS we celebrate 50 years of the US Open with the one and only Chris Evert.

The highly anticipated third round match between Serena and Venus Williams leads our rundown. Only that could top both defending champions, Sloane Stephens and Rafael Nadal, highlighting the day session. And you won't want to miss our conversation with 1971 champion Stan Smith, who shares his experiences on and off the court with his friend and fellow tennis star Arthur Ashe.

We preview Day 4 highlighted by Roger Federer, Novak Djokovic, Angelique Kerber and Maria Sharapova. We chat with doubles champion-turned-author  Horia Tecau. And as part of our 50th anniversary celebration,  we visit with two-time champion Monica Seles.

26: US Open Day 3 Preview plus Rod Laver on Open Tennis

Defending champions Sloane Stephens and Rafael Nadal start and finish the schedule inside Arthur Ashe Stadium. In between and elsewhere? Serena, Venus, Andy Murray and Juan Martin Del Potro to name a few. We preview the Day 3 schedule PLUS talk visit with the legendary Rod Laver about the dawn of Open tennis.

Roger Federer and Novak Djokovic in action. Need we say more? How about Caroline Wozniacki and Angelique Kerber? Join us for a Day 2 preview. We also speak with Jason Kubler…plus we celebrate 50 years of the US Open with Billie Jean King.

Our year-long celebration of 50 years of the US Open concludes with a competitor who was much larger than the game she played, Billie Jean King. She talks about the dawn of Open tennis, her trailblazing career and, of course, the US Open.

US Open qualifying play is underway! Spend time during this lead up to the 50th anniversary tournament with one of the most important and accomplished players in the history of the game, four-time US Open champion John McEnroe.

22: Series Chat with Lindsay Davenport, Catching Up with Monica Puig

The US Open is almost upon us! Former world No. 1 and US Open champion Lindsay Davenport joins us to discuss how the US Open Series is wrapping up. We also catch up with 2016 Summer Olympic champion Monica Puig.

Our celebration of 50 years of the US Open brings us back to the 1990s and to one of the top male players in the history of tennis, Pete Sampras. He won five US Open championships, a distinction he shares in the Open Era with Roger Federer and Jimmy Connors.