Interviews with Political Scientists about their New BooksSupport our show by becoming a premium member! https://newbooksnetwork.supportingcast.fm 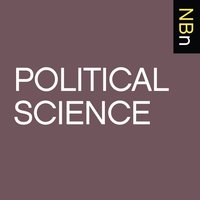 Many scholars have interrogated the incarceration of 120,000 Japanese-Americans during WWII – with an eye to understanding the particular type of racism that allowed the administration of Franklin D. Roosevelt to punish based on heritage rather than any particular action or crime. Bradford Pearson’s new book The Eagles of Heart Mountain: A True Story of Football, Incarceration, and Resistance in World War II America (Atria/Simon and Schuster, 2021) provides a political history of the incarceration of Japanese-Americans during WWII by, first, going back in time to highlight the complex history of how Japanese (and Chinese) Americans first came to the West coast in the 17th century and the nuances of the racism they encountered over the centuries. Once Pearson establishes the origins of Anti-Asian-American racism, he follows several teenagers who played football both free and incarcerated. These nisei, American citizens of Japanese heritage, had their education and participation in a sport that has come to define what is “American” interrupted by the transports, relocations, and imprisonments that placed families in concentration camps across the United States. Pearson uses their role in a football team created in one concentration camp – Heart Mountain Relocation Center in Cody, Wyoming – to document racism and discrimination but also sports competition as a means of escapism and regaining dignity. Pearson, the former features editor of Southwest: The Magazine and a journalist who has published in the New York Times, Esquire, Time, and Salon, uses foundational works in history and political science, his own oral histories, government surveillance files, and archives associated with Heart Mountain, to create a relevant history for considering how we define citizenship in the U.S., the role of the legislature and courts in establishing and maintain white supremacy, American acceptance of incarceration based on race, and the importance of fully contextualizing American public figures such as Franklin Delano Roosevelt, Eleanor Roosevelt, and Earl Warren.Susan Liebell is an associate professor of political science at Saint Joseph’s University in Philadelphia. Why Diehard Originalists Aren’t Really Originalists recently appeared in the Washington Post’s Monkey Cage and “Retreat from the Rule of Law: Locke and the Perils of Stand Your Ground” was published in the Journal of Politics (July 2020). Email her comments at sliebell@sju.edu or tweet to @SusanLiebell. Learn more about your ad choices. Visit megaphone.fm/adchoicesSupport our show by becoming a premium member! https://newbooksnetwork.supportingcast.fm