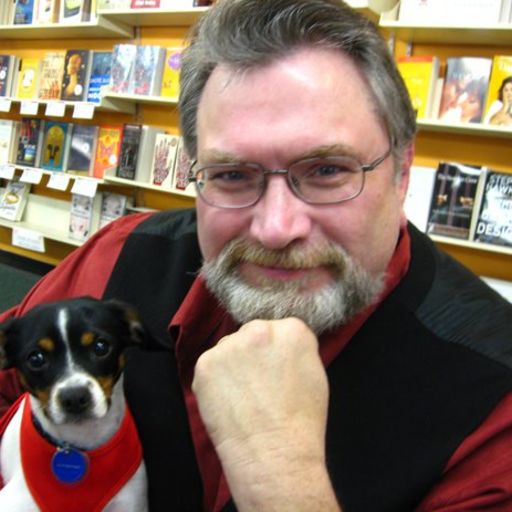 It's the triumphant return of Livius to his hosting duties! After a very relaxing vacation, Liv is back to talk about the latest Jonathan Maberry book, Ink! Check out our thoughts, and support us on Patreon if you're interested in hearing our spoiler talk about Ink!

What's Up, Fandom! On this week's episode, Josh &amp; Jason sit down with suspense author, playwright, comic book writer, and  writing teacher/lecturer Jonathan Maberry. Join us as we discuss Jonathan's career, martial arts, how he got into writing, how his first novel won a Bram Stoker award, the 'Maberryverse', working with George A. Romero, creating the the Netflix series "V Wars", working with Marvel comics, and creating the official sequel to "Night of the Living Dead" with his book "Rot &amp; Ruin".  We also a announce our Jonathan Maberry giveaway! You can win one of 2 signed copies of "Rot &amp; Ruin' or one of 2 signed copies of "Broken Lands". Plus, each winner will receive an exclusive "Rot &amp; Ruin" IDW Comics preview comic. (Sadly, you cannot actually win Mr. Maberry. We couldn't clear that through legal.) All you have to do to enter is: 1. Follow Jonathan &amp; What's Up, Fandom on social media 2. Tag 2 friends in our Giveaway Posts 3. For a bonus entry, comment your favorite "Rot &amp; Ruin" character  That's it! Enter by 11:59pm PST on September 24th. Winners will be announced on September 25th. Warrior Strong.  Follow Jonathan: Instagram @jonathanmaberry Twitter @JonathanMaberry Website jonathanmaberry.com Check out "V Wars on Netflix HERE Follow Jason: Instagram @simpstagrams Twitter @aboySimpson Do you have suggestions for the show? Do have specific voice actor or creator that you would like us to interview? We would love to hear from you! Feel free to shoot us an email HERE. Be sure to head over to our website AnimationStationPodcast.com to check out both What's Up, Fandom &amp; Animation Station Podcast episodes.  If you enjoy the show, please rate and review! Follow the show on: Instagram @WhatsUpFandom Twitter @WhatsUpFandomPC YouTube Animation Station Podcast Follow Josh @JoshLCain Tags: podcast, podcasts, movies, tv, comics, popculture, fandom, animation, nerd, geek, author, jonathanmaberry, rotandruin, brokenlands, patientzero, netflix, vwars, books, interview, giveaway, georgeromero

The FBI's Most Unwanted

In this very special extra episode, Matt is joined by New York Times best selling, 5 time Bram Stoker Award winning author Jonathan Maberry to talk about his novel "X-Files Origins: Devil's Advocate" and the three X-Files short story anthologies he edited as well as the series as a whole.

Follow Us on Social Media:Twitter: @DrinkWAuthorsInstagram: DrinkingwithAuthorsCall us or email us with questions or inquiries!Email: DrinkingWithAuthors@gmail.comPhone: (727) 300-6752New episodes weekly!Music and Artwork by: James D. Haney, Jr.JONATHAN MABERRY is a New York Times bestselling author, 5-time Bram Stoker Award-winner, and comic book writer for Marvel, IDW, DC, and Dark Horse. His vampire apocalypse book series, V-WARS, was a hit Netflix original series. He writes in multiple genres including suspense, thriller, horror, science fiction, fantasy, and action; for adults, teens and middle grade. He is a board member of the Horror Writers Association and the president of the International Association of Media Tie-in Writers.Follow Jonathan on Social Media and buy his books!www.jonathanmaberry.comFacebook: Facebook.com/jonathanmaberryTwitter: @jonathanmaberryInstagram: @jonathanmaberry

Follow Us on Social Media:Twitter: @DrinkWAuthorsInstagram: DrinkingwithAuthorsCall us or email us with questions or inquiries!Email: DrinkingWithAuthors@gmail.comPhone: (727) 300-6752New episodes weekly!Music and Artwork by: James D. Haney, Jr.JONATHAN MABERRY is a New York Times bestselling author, 5-time Bram Stoker Award-winner, and comic book writer for Marvel, IDW, DC, and Dark Horse. His vampire apocalypse book series, V-WARS, was a hit Netflix original series. He writes in multiple genres including suspense, thriller, horror, science fiction, fantasy, and action; for adults, teens and middle grade. He is a board member of the Horror Writers Association and the president of the International Association of Media Tie-in Writers.Follow Jonathan on Social Media and buy his books!www.jonathanmaberry.comFacebook: Facebook.com/jonathanmaberryTwitter: @jonathanmaberryInstagram: @jonathanmaberry

Episode 6-Let's Talk Writing in the Pandemic with Jonathan Maberry

Had the pleasure of interviewing my friend Jonathan Maberry. Follow him: jonathanmaberry.comOn Twitter https://www.twitter.com/jonathamaberryOn Facebook https://facebook.com/jonathanmaberryNew York Times best-selling and five-time Bram Stoker Award-winning author, anthology editor, comic book writer, magazine feature writer, playwright, content creator, and writing teacher/lecturer. He was named one of the Today’s Top Ten Horror Writers. Jonathan writes in several genres. His young adult fiction includes ROT &amp; RUIN(2011; was named in Booklist’s Ten Best Horror Novels for Young Adults, an American Library Association Top Pick, a Bram Stoker and Pennsylvania Keystone to Reading winner; winner of several state Teen Book Awards including the Cricket, Nutmeg and MASL; winner of the Cybils Award, the Eva Perry Mock Printz medal, Dead Letter Best Novel Award, and four Melinda Awards); DUST &amp; DECAY (winner of the 2011 Bram Stoker Award; FLESH &amp; BONE (winner of the Bram Stoker Award; 2012; and FIRE &amp; ASH (August 2013). BROKEN LANDS, the first of a new spin-off series, debuted in 2018. The last in the series comes out August 2020.Jonathan is the creator, editor, and co-author of V-WARS, a shared-world vampire anthology from IDW, and its sequels, V-WARS: BLOOD AND FIRE, V-WARS: NIGHT TERRORS, and V-WARS: SHOCKWAVES. And he writes a best-selling monthly V-WARS comic. A board game version of V-Wars was released in 2017. A Netflix original series, starring Ian Somerhalder (LOST, VAMPIRE DIARIES) debuted in early 2019.His novels include the Joe Ledger series from St. Martin’s Griffin (PATIENT ZERO, 2009, winner of the Black Quill and a Bram Stoker Award finalist for Best Novel; EXTINCTION MACHINE, (2013; now in development for TV by SONY); PREDATOR ONE, and others. His first middle-grade novel, THE NIGHTSIDERS BOOK 1: THE ORPHAN ARMY (Simon &amp; Schuster) was named one the 100 Best Books for Children 2015. His horror novels include The Pine Deep Trilogy from Pinnacle Books (GHOST ROAD BLUES, 2006, winner of the Bram Stoker Award for Best First Novel and named one of the 25 Best Horror Novels of the New Millennium; DEAD MAN’S SONG, 2007; and BAD MOON RISING, 2008), as well as DEAD OF NIGHT, 2011 (named one of the 25 Best Horror Novels of the New Millennium) and its sequel, FALL OF NIGHT, 2014. He also wrote the movie novelization, THE WOLFMAN, 2010, winner of the Scribe Award for Best Adaptation; and DEADLANDS: GHOSTWALKERS, an original novel inspired by the million-copy-selling role-playing game. He also wrote the official story of teenage Dana Scully in X-FILES ORIGINS: DEVIL’S ADVOCATE.He is also the editor of the dark fantasy anthology series, OUT OF TUNE(JournalStone); a series of THE X-FILES anthologies which launched in 2015; SCARY OUT THERE, an anthology of horror for teens; and the anthologies ALIENS: BUG HUNT, NIGHTS OF THE LIVING DEAD (with George Romero), JOE LEDGER: UNSTOPPABLE (with Bryan Thomas Schmidt) and two volumes of mysteries: ALTERNATE SHERLOCKS and THE GAME’S AFOOT (with Michael Ventrella). He is also the editor of the highly anticipated middle-grade anthology, NEW SCARY STORIES TO TELL IN THE DARK, a tribute to the beloved series by Alvin SchwartzInterested in Podcasting?   Follow the link https://www.buzzsprout.com/?referrer_id=815467  it Support the show (https://www.patreon.com/LegionofWritersPod )

EP 21 Caring for Someone Who Abused You :: Jonathan Maberry

New York Times bestselling author, 5-time Bram Stoker Award winner, and comic book writer Jonathan Maberry talks with Bobbi and Mike about the choice he and his his wife made to care - over many years - for his Dementia stricken father. Their discussion ranges from revealing that in one of his novels he gave Dementia characteristics to its zombie characters, to the emotional challenges that emerge in caring for a loved one who had been abusive as a parent.  Don't forget to subscribe, download and review to share your thoughts about the show! To find out more about Bobbi and Mike or the inspiration behind this podcast, Rodger That, head over to rodgerthat.show.