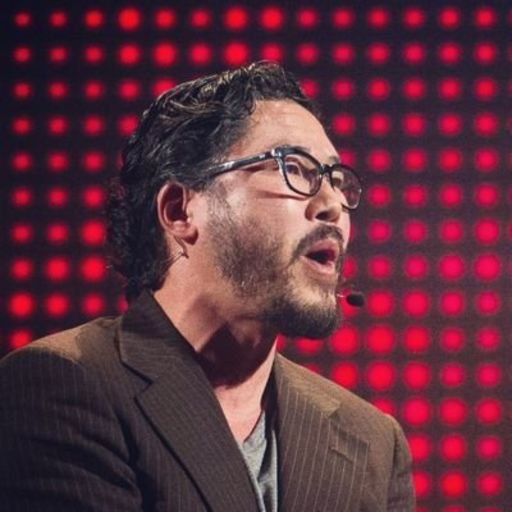 This conversation with Eugene Cho is a powerful tool to engaging in politics, as mature Christians seeking to give theological and Biblical framework that isn't bound to either political party. Eugene's latest book "Thou Shalt Not Be a Jerk: a Christian's Guide to Engaging Politics" is a must read, equipping us with the 10 commandments of conversations surrounding politics.For more information on Eugene and his works, visit eugenecho.orgInterviewed by Lisa Jernigan, hosted by Julie Beanamplifypeace.com

Rev. Eugene Cho’s many passions involve leadership, justice, the whole Gospel, and the pursuit of God’s Kingdom here on this earth. He travels throughout the world to encourage churches, non-profits, pastors, leaders, missionaries, and justice workers – whether this happens in churches, arenas, conferences, universities, or as a guest in underground churches or refugee camps.Eugene is the President/CEO of Bread for the World and Bread Institute, a prominent non-partisan Christian advocacy organization urging both national and global decision makers to help end hunger – both in the United States and around the world. Bread has been engaged in this critical discipleship of advocacy for the hungry and vulnerable since its inception in 1974.He is also the founder and visionary of One Day’s Wages (ODW) – a grassroots movement of people, stories, and actions to alleviate extreme global poverty. Since its launch in October 2009, ODW has raised over $8 million dollars for projects to empower those living in extreme global poverty. He is also the founder and former Senior Pastor of Quest Church.Eugene is the author of two acclaimed books, Thou Shalt Not Be a Jerk: A Christian’s Guide to Engaging Politics (2020) and Overrated: Are We More in Love with the Idea of Changing the World Than Actually Changing the World? (2014)Eugene and Minhee have been married for 23 years and have three children. Together, they live in Seattle, Washington.For more information, visit eugenecho.comInterviewed by Lisa Jernigan, hosted by Julie Bean.amplifypeace.com

The Pursuit with Richard Lee

1st Grade Failure Barnes &amp; Noble Janitor Couch Surfing with Kids Today on The Pursuit: Eugene Cho Eugene is President &amp; CEO of Bread for the World, Founder &amp; President of One Days Wages, Founder and Former Senior Pastor of Quest Church in Seattle. But what struck me the most was Eugene's journey from shy, immigrant kid to world-changing activist. Show notes: Eugene Cho on Twitter: @EugeneChoEugene Cho on Instagram: @EugeneCho Thou Shalt Not Be a Jerk: Buy on Amazon Overrated: Buy on AmazonBread for the World: bread.orgOne Days Wages: onedayswages.org The Pursuit with Richard Lee, now a featured podcast at the SOLA Network: sola.network Social for The Pursuit with Richard Lee:Twitter - @thepursuitcastInstagram - @thepursuitcastFacebook - thepursuitcast Rate and Review on iTunes!

Rev. Eugene Cho is the President &amp; CEO of Bread for the World and Bread Institute, a non-partisan Christian advocacy organization urging both national and global decision makers to help end hunger – both in the United States and around the world. Additionally, he is the founder and visionary of One Day’s Wages  – a grassroots movement of people, stories, and actions to alleviate extreme global poverty. Eugene is the author of two acclaimed books including his most recent, Thou Shalt Not Be a Jerk: A Christian’s Guide to Engaging Politics Today, Rev. Cho catches us up on the last few years of his life, reflects on 2020, and challenges our thinking of what it means to be someone who is trying to effect lasting change in the world. Links from the Interview - To engage with any of Eugene's projects, go to: https://eugenecho.com - For all things Propaganda, head to: https://www.prophiphop.com/ -  The New Activist is presented by IJM: https://www.ijm.org/ The New Activist Social T - https://twitter.com/NewActivistIs FB - https://www.facebook.com/newactivistis/ IG - https://www.instagram.com/newactivistis/ web - http://www.newactivist.is Eddie Kaufholz, Host - https://twitter.com/edwardoreddie

How to Talk Politics Without Being a Jerk: A Conversation with Eugene Cho | Selfie Podcast Episode 149

Eugene Cho is talking about how to have a civil dialogue about politics, the polarization of political parties, and the problem with Christians aligning with a party over their moral convictions.  Thou Shalt Not Be a Jerk: A Christian's Guide to Engaging Politics, Kristen and Eugene’s trip to Iraq and Lebanon  Air Queen N95 Substantial Equivalent Masks   The Happy Labs Chill Pills   TheBalm Stainiac Ninja Coffee Maker Today’s show is brought to you by EBY,  a seamless underwear membership.Eby’s are seamless and smooth, with the perfect amount of softness and stretch . . . your new super power to fight VPLs, slipping, or riding up. A no-slip grip keeps everything in place, with a cotton lining to keep your lady parts healthy. They have fits and styles in sizes XS-4X to fit every woman. Joining EBY gives you access to exclusive, members-only offers, free shipping, limited edition prints, and weekly power tips on confidence and productivity. A membership keeps your underwear drawer fresh AND helps fund cyclical microfinance loans for women around the world. 10% of every EBY purchase funds business loans for women around the world. Get 20% your first order at joineby.com with code SELFIE20.

On today’s show my friends Amy Wolff and Eugene Cho join me. We talk about how to engage in the nuance of political policies, and being careful not to dehumanize those we disagree with. I really value the way Amy and Eugene pursue unity in Christ above all, and how they allow that truth to shape the way they engage in these conversations. For the full episode and show links, click the link below! Connect with Jamie Facebook // Twitter // Instagram // YouTube GET ALL THE LINKS FROM THE SHOW HERESee omnystudio.com/listener for privacy information.

Rev. Eugene Cho sits down with Pastor Steph and Pastor Edrin to discuss the tension surrounding how Christian leaders engage politically in these divisive times. Eugene is the President of Bread For The World  - A Christian advocacy organization that is a collective Christian voice urging our nation’s decision makers to end hunger at home and abroad. His book Thou Shalt Not Be A Jerk is a great tool to guide us as Jesus followers. You can get the book anywhere books are sold. Eugene invites everyone to engage and take action in the world hunger crisis by going to www.bread.org/eugene You can follow Eugene on Twitter and Instagram @eugenecho and the rest of his work at www.EugeneCho.com Connect with Lead Stories, Jo, Steph and Edrin: Instagram &amp; Facebook: @LeadStoriesPodcast Connect with Jo at www.josaxton.com @josaxton Connect with Pastor Steph at www.pastorsteph.com @pastorsteph Connect with Pastor Edrin at @edrinspeaks Subscribe on iTunes to have the podcast automatically download to your device every week or listen at www.leadstoriespodcast.com www.leadstoriesmedia.com Lead Stories resources at: www.leadstoriesmedia.com/resources Other podcasts produced by Lead Stories Media: www.leadstoriedmedia.com/podcasts

Made For This with Jennie Allen

We are headed into an election and every single day we are faced with new decisions as we navigate politics well in 2020. As followers of Jesus, we get to keep a spirit of mercy, peace, and love towards others even in the midst of the division. I know you will love this episode with my friend Rev. Eugene Cho. Find Eugene's new book here: https://www.amazon.com/Thou-Shalt-Not-Jerk-Christians/dp/0781411157/ref=sr_1_2?dchild=1&amp;keywords=eugene+cho&amp;qid=1598303725&amp;sr=8-2Get your IF:Lead digital access pass to watch this convo and even more amazing breakout sessions all year long: iflead2020.com

My guest for The Happy Hour #313 is Eugene Cho. Eugene is the President and CEO of Bread for the World, a Christian advocacy organization urging our nation’s decision-makers to end hunger at home and abroad. He is also the founder/visionary of One Day’s Wages, as well as the founder and former Senior Pastor of Quest Church. Eugene lives in Seattle with his wife of 24 years and three children. He released a book earlier this year called Thou Shalt Not Be a Jerk: A Christian’s Guide to Engaging Politics. Friends, I am beyond excited to share this episode with you. It’s thought-provoking, encouraging, and challenging which is the perfect blend for a great conversation. Eugene talks about fighting against the stereotypes surrounding poverty in the U.S., starting a new job and leaving his home of Seattle behind, and engaging in civic duty beyond voting. He also gets into the effects of political tension in our nation and how we can often place our allegiance to political parties above the kingdom of God. Division is never easy or light, but I love it when Eugene says, “To be a Christ-follower is to be faithful amid tension.” Wow. I know the world sometimes feels like it’s crumbling, but I’m so thankful for Eugene’s reminder that we are called to love God and love people through the tension. I hope you walk away from this conversation feeling as encouraged as I did. To connect more about Jamie’s book, text YOUBEYOU to 33777. Connect with Jamie Facebook // Twitter // Instagram // YouTube GET ALL THE LINKS FROM THE SHOW HERESee omnystudio.com/listener for privacy information.

#SummerReplay -  In this compelling episode recorded in the spring, Stephanie talks with Eugene Cho, pastor, speaker, author, visionary and humanitarian. A son of Korean immigrants and a natural entrepreneur, Cho spends much of his time circling the globe speaking about the intersection of faith, justice, and leadership.  Eugene's new book "Thou Shalt Not Be a Jerk: A Christian's Guide to Engaging in Politics" is available HERE.  Connect with Lead Stories and Jo and Steph: Twitter: @LeadStoriesVox Instagram: @LeadStoriesPodcast Facebook: LeadStoriesPodcast Connect with Jo at www.josaxton.com @josaxton Connect with Steph at www.pastorsteph.com @pastorsteph  Subscribe on iTunes to have the podcast automatically download to your device every week or listen at www.leadstoriespodcast.com For other resources and podcasts head to: www.leadstoriesmedia.com Don’t forget to check out Lead Stories Community at www.leadstoriesmedia.com/community