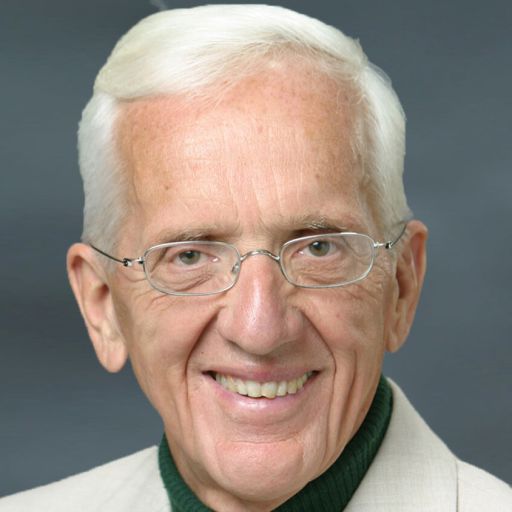 World-renowned co-author of The China Study, one of the most comprehensive studies of health and nutrition ever conducted, and recognized by The New York Times as the “Grand Prix of epidemiology,” discusses his life, career, and his most recent book, The Future of Nutrition: An Insider's Look at the Science, Why We Keep Getting It Wrong, and How to Start Getting It Right, that was published in December 2020!--- This episode is sponsored by · Anchor: The easiest way to make a podcast. https://anchor.fm/app--- Send in a voice message: https://anchor.fm/veganstoriespodcast/messageSupport this podcast: https://anchor.fm/veganstoriespodcast/support

Dr. T. Colin Campbell on the Future of Nutrition

Matt sits down with Dr. T. Colin Campbell, a key figure in the plant-based movement, to talk about how he sees the future of nutrition progressing. Dr. Campbell shares his take on plant-based meats, nutrition in politics, and a whole lot more.

In this interview, I pick the brain of T. Colin Campbell, author of The China Study and pioneer of the plant-based nutrition movement.  Find out more about Dr. Campbell: www.NutritionStudies.org Hosted by Jason Fonger: www.jasonfonger.com

Staying Healthy with the Author of the China Study T. Colin Campbell

T. Colin Campbell is a biochemist and the author of three books including the groundbreaking The China Study and over 300 research papers which explores the effect of nutrition on long-term health. He is known for his advocacy of a low-fat, whole foods, plant-based diet to heal you and help you live a long and healthy life. He was featured in the 2011 documentary Forks Over Knives which convinced countless viewers to turn vegetarian, vegan or at least more plant-based. He discusses his research findings on which foods to eat and which to avoid that may help prevent heart disease, cancer &amp; other diseases. Learn more about your ad choices. Visit megaphone.fm/adchoices

During this Episode, Holly interviews the Author of the famous China Study. Dr. T. Colin Campbell. They discuss everything that was discovered during the world-famous study and ways to reverse disease. The main points of this episode will cover: Why is cancer common in some places and not others? Reverse Heart Disease Animal vs Plant-Based Protein Thomas Colin Campbell is an American biochemist who specializes in the effect of nutrition on long-term health. He is the Jacob Gould Schurman Professor Emeritus of Nutritional Biochemistry at Cornell University. Campbell was one of the lead scientists of the China–Cornell–Oxford Project on diet and disease, set up in 1983 by Cornell University, the University of Oxford, and the Chinese Academy of Preventive Medicine to explore the relationship between nutrition and cancer, heart, and metabolic diseases. The study was described by The New York Times as "the Grand Prix of epidemiology". He is the founder of the T. Colin Campbell Center for Nutrition Studies, a 501c3 organization, which was created to provide education about the whole food, plant-based lifestyle Campbell recommends. The Center partners with eCornell to provide an online course which is the focus of the education programs. Campbell is the president of the board of directors for the Center. Campbell has become known for his advocacy of low-fat, whole foods, plant-based diet. He is the author of over 300 research papers and three books, The China Study (2005, co-authored with his son, Thomas M. Campbell II, which became one of America's best-selling books about nutrition), Whole (2013), and The Low-Carb Fraud (2014). Campbell featured in the 2011 American documentary Forks Over Knives.

Professor T. Colin Campbell joins us for an interview on a range of topics relating to nutrition, whole-foods plant-based diet, and academic freedom. The conversation explores the definition of nutrition in the context of his research in China that revealed the relationship between animal protein consumption and chronic diseases as well as the correct way to think about diet. Campbell also reflects on the pushback on his research he experienced from policymakers and industries and asserts the importance of having academic freedom in universities. Professor Campbell is the Jacob Gould Schurman Professor Emeritus at the College of Human Ecology division of Nutritional Sciences. He is widely recognized as a top researcher in the field of Nutritional Science. Professor Campbell has published over 300 research papers and 3 books, including The China Study, which became one of America's best selling books about nutrition. In 2011, he was featured in the documentary ‘Forks Over Knives’. In his over 45 years at Cornell, he has served as an adviser to the American Institute for Cancer Research and chaired the board for the Physicians Committee for Responsible Medicine. Since 1978, he has been the member of several United States National Academy of Sciences expert panels on food safety, and holds an honorary professorship at the Chinese Academy of Preventative Medicine.Links from the Episode at presentvaluepodcast.comFaculty Profile: T. Colin CampbellResearch Paper: Past, Present, and Future of Nutrition and Cancer Twitter: @TColinCampbell

Welcome to episode 17 of the Plantarion Podcast!  Danni McGhee talks with Dr. T. Colin Campbell about the connection of COVID-19 with China and his new book coming out this December.SUBSCRIBE TO PLANTARION PODCAST ON YOUR FAVORITE PODCAST PLAYER!Interview with Dr. T. Colin CampbellT. Colin Campbell, PhD has been dedicated to the science of human health for more than 60 years. His primary focus is on the association between diet and disease, particularly cancer. Although largely known for the China Study--one of the most comprehensive studies of health and nutrition ever conducted, and recognized by The New York Times as the “Grand Prix of epidemiology”--Dr. Campbell’s profound impact also includes extensive involvement in education, public policy, and laboratory research.(0:00) Welcome to the Plantarion Podcast(2:14) Introducing Dr. T Colin Campbell(3:00) Why he doesn't identify as a vegan(11:33) What Danni &amp; Dr. Campbell have in common(13:50) What inspired you to do the China Study(32:06) The link between COVID-19 and China(43:24) Is eating a plant-based diet enough to keep a strong immune system(45:02) His new book coming out this year(49:23) Nutrition Studies, eCornell, &amp; Plant Pure Communities(56:53) Follow T. Colin Campbell and his campaignsFollow T. Colin Campbell &amp; his campaignsNutrition StudiesInstagramFacebookTwitterYouTubePlant Pure CommunitiesThe China StudyFollow Plantarion on Instagram, Facebook, Twitter, &amp; Youtube!SHARE YOUR THOUGHTS ABOUT THIS EPISODE ON OUR LATEST INSTAGRAM POST!CLICK HERE TO SUBSCRIBE TO PLANTARION ON YOUTUBE

Plant Based Eating for Health

For more than 40 years, Dr. T. Colin Campbell has been at the forefront of nutrition research. His legacy, the China Project, is the most comprehensive study of health and nutrition ever conducted. Dr. Campbell is the Jacob Gould Schurman Professor Emeritus of Nutritional Biochemistry at Cornell University. He has more than 70 grant-years of peer-reviewed research funding and authored more than 300 research papers and coauthor of the bestselling the book, "The China Study: Startling Implications for Diet, Weight Loss and Long-term Health." Enjoying vibrant health and an active lifestyle well into his late eighties, Dr. Campbell continues his quest to educate people that "the ideal human diet looks like this: Consumer plant-based foods in forms as close to their natural state as possible...eat a variety of vegetables, fruits, raw nuts and seeds, beans and legumes, and whole grains." Recognized as a pioneer in the plant based movement, Dr. T. Colin Campbell, author of the China Study, believes that the government should withhold funding for medical schools unless they agree to teach nutrition according to what we know. The National Institutes of Health should have another institute dedicated to nutrition. And at a community level, support for nutrition programs. https://nutritionstudies.org/ https://plantpurecommunities.org/

For 65-years, Dr. T. Colin Campbell has been a courageous truth-seeker and unapologetic truth-teller in the scientific research and study of nutrition.  Of course, most know his work from The China Study,  Whole, Forks over Knives, and his repeat visits to Plant Stock, but recently, Dr. Campbell released two articles that speak to this “revolutionary idea” that the best defense against Covid-19 is whole food plant-based diet. In fact, not only is it the best cautionary measure you can take, but it’s also the most responsible to protect the strain on the hospital system, our global environment, and the food supply chain, which has been severely compromised. Dr. Campbell and Rip discuss his body of work over the last six decades and explore the contents of his recent essays on his ideal prescription for optimal health - a whole-food, plant-based diet. Episode Resources: Register Now for the Plant-Strong Primer Support for this week's episode comes from Wild Earth Dog Food - use promo code: PLANTSTRONG for 40% order T.Colin Campbell Center for Nutritional Studies Recovery From the COVID-19 Pandemic: Testing, Tracing, &amp; Nutrition Seeking a solution for making the plant-strong lifestyle convenient and inspiring? The Plant-Strong Meal Planner offers 1000s of recipes customized to your preferences, an integrated shopping list, and grocery delivery! Our Engine 2 Coaches are on hand to offer support and answer any questions. Visit our Plant-Strong Meal Planner today and use promo code: HEALTHNOW to save $20 off an annual plan. Theme music for episode

Dr. T. Colin Campbell: The China Study and the Coronavirus

The Exam Room by the Physicians Committee

Have we known the roadmap to treat the COVID-19 virus all along? Dr. T. Colin Campbell joins “The Weight Loss Champion” Chuck Carroll to discuss how his groundbreaking research for The China Study decades ago may have provided a key to a better prognosis for today’s coronavirus pandemic. Dr. Campbell is confident that there is enough evidence to make a strong hypothesis about the steps people should be taking to combat the virus. And is it a coincidence that the United States has more total cases of COVID-19 than any other country in the world while also staking claim to one of the highest obesity rates? Dr. Campbell and Chuck also ponder how the standard American diet might be fueling the pandemic in the U.S. Plus, filmmaker Nelson Campbell, founder of Plant Pure Nation, follows his father on the show to discuss the efforts he and his team are making to help during the pandemic, including a global program designed to encourage people to change their diet. His goal is to plant the seeds of knowledge worldwide to help people grow into healthier lives. “The diet that will prevent and reverse chronic disease, it stands to reason that it would also help with infectious disease. Health is health is health no matter what you’re talking about with respect to your body,” Nelson Campbell said. — — — Plant Pure Communities Global Jumpstart: https://bit.ly/3czWI00 — — — Chuck Carroll Twitter: @ChuckCarrollWLC IG: @ChuckCarrollWLC Facebook: https://wghtloss.cc/ChuckFacebook — — — Physicians Committee Twitter: @PCRM IG: @PhysiciansCommittee Facebook: https://wghtloss.cc/PCRMFacebook — — — Barnard Medical Center Telemedicine Schedule Appointment: https://bit.ly/BMCtelemed — — — COVID-19 Resources PCRM: https://bit.ly/PCRMcovid CDC: https://bit.ly/33DXgyF WHO: https://bit.ly/33BSeTo COVID-19 Global Map: https://bit.ly/CVID19map Share the Show Please subscribe and give the show a 5-star rating on Apple Podcasts, Spotify or many other podcast providers. Don’t forget to share it with a friend for inspiration!