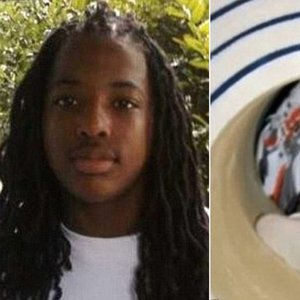 JonBenet Ramsey is one of the most horrific and mesmerizing cold case mysteries of all time that has remained unsolved for over 25 years, until NOW. Human Vibrations has claimed she discovered two years ago that JBR NEVER even existed. Hosts: @MKUltraMoney, @jeffersonpoland, @vers_laLune, and @JulespHamilton Guest: @HumanVibration Get the FULL 2.5 HOUR UNCUT JonBenet Ramsey episode on https://mkultramoney.gumroad.com/ Watch video version on YouTube: https://www.youtube.com/c/MKUltraMoney

Garage Refill /// JonBenet Ramsey /// Part 2We have a kidnapping, hurry please! /// Part 2 of 6www.TrueCrimeGarage.comOn December 26th 1996, 6-year old JonBenet Ramsey was found murdered in the basement of her home in Boulder, Colorado. Her case remains unsolved. Beer of the Week - Citra Noel Hoppy Holiday Ale by Columbus Brewing Company Garage Grade - 4 and a quarter bottle caps out of 5The full archive of True Crime Garage is available on the Stitcher listening app - for FREE. Our show “Off the Record” is only on Stitcher Premium. For a FREE month of listening go to http://stitcherpremium.com/truecrimegarageand use promo code GARAGEBeer Fund: https://truecrimegarage.com/home

We finish our deep dive into the case of Jon Benét Ramsey.See omnystudio.com/listener for privacy information.

What Happened to JonBenet Ramsey?

WHO KILLED JON-BENET??? Six-year-old JonBenét Ramsey is killed in her Boulder, Colorado, home. John and Patsy Ramsey, her parents, called police at 5:52 A.M. the following morning to report that their daughter was missing. Although police found a ransom note demanding $118,000, the money would never be necessary, because JonBenét's body was found under a blanket in the basement that afternoon. The crime soon became a national sensation. JonBenét, who had been beaten and strangled, was found with tape over her mouth and her hands tied together with a cord. There were also some signs of sexual assault. However, Boulder detectives did a poor job of preserving the evidence and actually allowed John Ramsey to disrupt the crime scene by removing his daughter’s body from the basement. With no signs of an intruder, suspicion quickly fell on JonBenét's parents.The ransom note seemed suspicious to authorities. Not only did the strangely specific amount of the ransom–$118,000–match the exact amount of John Ramsey’s bonus from his employer, the paper that the ransom note had been written on paper found in the Ramsey home. The note also seemed to be unusually wordy. For the curious public, the fact that John and Patsy Ramsey failed to cooperate with the investigation fueled speculation about their guilt. In addition, JonBenét's active participation in beauty pageants, which required her to wear heavy makeup and sophisticated clothing, was widely considered to be inappropriate.  The investigation into JonBenét's murder continued for more than two years. But in October 1999, the grand jury hearing evidence in the case was finally dismissed with no recommendation for filing charges. The jury did, however, vote to indict the Ramseys on child endangerment and obstruction of a murder investigation, but the prosecutor declined to prosecute. In 2006 former schoolteacher John Mark Karr was arrested after confessing to the murder; however, Karr’s DNA did not match samples found on JonBenét's body and he was released.

The War and Peace of Ransom Notes: The JonBenet Ramsey Case

Words To Kill By

Early in the morning on December 26th, 1996, Patsy Ramsey found a 2.5 page ransom note, waiting for her on the steps she had to walk in order to get to the kitchen for her morning coffee. Upon reading the note, Patsy knew her daughter was in serious trouble. In fact, her daughter had been kidnapped, or so everyone thought for the next several hours. Later that afternoon, a more thorough search was conducted and the body of Patsy's daughter was found in the family basement. Join us as we study the ransom note and other language evidence in the murder of JonBenet Ramsey.

The Murder of JonBenet Ramsey

Crime With My Coffee

Christmas morning in 1996 would become one that many people know.  Patsy Ramsey woke up in her home in Boulder, Colorado and found a ransom note on the stairs of her home saying that someone had kidnapped her 6 year old daughter, JonBenet, and that they would contact her and her husband John with instructions on how to pay her ransom for her safe return.  Later that same day, John Ramsey would find the body of his daughter in a locked room in the basement.  This case, though it has many suspects and just as many theories about what happened to JonBenet, remains unsolved.Sources for this episode:Wikipedia - Patsy Ramsey, John Bennett Ramsey, Atlanta, Boulder, Colorado, Killing of JonBenet RamseyIMDB - JonBenet Ramsey BiographyPeople - 25 Years After JonBenet Ramsey's Murder, Police Still Hope New DNA Technology Will Crack CaseFilm Daily - The unsolved death of American beauty princess JonBenet RamseyBite-Sized CrimeTrue crime on your lunch break! Get your fix each week with bite-sized episodes.Listen on: Apple PodcastsSpotifySupport the show

Part one of two we discuss the tragic murder of 6 year old JonBenet Ramsey on Christmas Day 1996.  --- Support this podcast: https://anchor.fm/toxic-mom/support