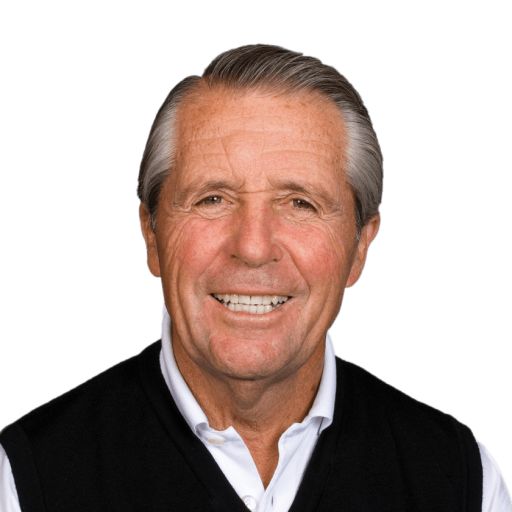 The Stick and Hack Show

Mike finds himself a lowly Hack among Hacks this episode as the ultimate Stick, Gary Player joins the show. If you're unfamiliar with Gary Player, allow us to kindly direct you to the nearest dumpster, as those are where your golf clubs belong. Gary shares stories, thoughts, life advice, and roasts Adam and Mike about their health habits. To quote Gary, "Between the three of us, we have 18 majors wins," and boy does Adam like hearing that.Visit StickandHack.com for the best in golf entertainment, tips, laughs, and community.

In this episode we are joined by a great from the world of Golf. Gary Player has won an incredible 165 tournaments across the world over the course of 5 decades. These successes include 9 major titles, 3 Opens, 3 Masters, 2 PGAs and the 1965 US Open!See acast.com/privacy for privacy and opt-out information.

Struggling and suffering are two common experiences that all humans face throughout their life's. But how we decide to overcome those difficulties determines who we will ultimately become. Gary Player is certainly no stranger to life's challenges. But he preserved with faith and education to overcome the challenging moments in his life. Gary is the most successful international golfer of all time. He has won nine major championships on the regular tour and nine major championships on the Champions Tour. And he is the only man in history to win the grand slam on both the PGA and the senior tour with over 165 international victories. In this episode, Gary passionately shares with us the knowledge and lessons he has learned throughout his life.Listen to this episode and learn about:- Gary giving credit and thanks to God (3:28)- Overcoming life's difficulties (4:54)- What Gary is fighting for on a daily basis (8:05)- Loneliness as the great detriment of life (14:00)- How to find joy when traveling (16:38)- Aspiring for meaning (18:29)- How Gary wants to be remembered (19:14)Links:- Gary's Foundation - https://garyplayer.com/the-player-foundation/- Connect with Gary on Twitter - https://twitter.com/garyplayer?ref_src=twsrc^google|twcamp^serp|twgr^author

GARY PLAYER shares his secrets to a successful life

WHY YOU SUCK AT GOLF!

Welcome to season 2! Gary Player is our first guest of the year. He shares his secrets to a successful life and is full of motivation and positivity. I hope you gain the courage you need to excel into the new year and pursue all your hopes and dreams on and off the golf course. Follow me @Averee_Dovsek

Gary Player on staying fit for a lifetime

In the debut episode of the Golf &amp; Fitness Show, presented by PGA TOUR Active, Cory speaks with Gary Player, who has been speaking to the benefits of a strategic approach to health and wellness for nearly all of his 85 years. During his competitive golf career, Mr. Player amassed 24 wins on the PGA TOUR, 22 on PGA TOUR Champions and more 100 worldwide.

next on the tee with chris mascaro

Gary Player joins me and we get an update on the health of his wife Vivienne who is battling pancreatic cancer. He also shares his thoughts on the frequency of guys shooting 59, how much more land Augusta National is going to need to buy to keep up with the golf ball, how he'd like to see Lee Elder join he and Jack Nicklaus for the honorary tee shot to begin The Masters, Sam Snead's longevity, and what he set he, Jack Nicklaus, and Tiger Woods apart from other players.

Next On The Tee with Chris Mascaro

Gary Player shares his thoughts on what will be a very different looking Masters, how he'd like Lee Elder to join he and Jack Nicklaus for the ceremonial tee shot, what made Bobby Locke the greatest putter ever, why Sam Snead is the greatest athlete to ever play the game, plus why greatness should be defined by longevity and the power of the mind.

Legendary golfer Gary Player joins the podcast to talk about his amazing life and career. Gary talks about being known as  the "World's Most Traveled Athlete" saying he has racked up more than 15 million air miles traveling the world in a legendary career that saw him win 165 tournaments, including 9  majors  over five decades.  Gary talks about being the first pro golfer to take his fitness and health seriously and still works out daily at the age of 84.  Jimmy and Gary were both part of a big 3 that helped change their respective sports and help take them to the next level.  Gary talks about his relationships with fellow golf legends Arnold Palmer and Jack Nicklaus and what it meant to be part of such a historical era of golf.  Plus Gary tells us how important family and faith are to him in his life, something Jimmy and Brett can definitely relate to.

Matt Adams speaks with World Golf Hall of Famer Gary Player about each of his majors and life during coronavirus.

It's a huge show for Episode #65 as we are joined by the man who completed the Grand Slam of golf majors in 1965, Gary Player. The 9-time major champion (he also won 9 more on the Champions Tour) joins us from self-isolation near Philadelphia to dig into a wide range of topics, both golf and non-golf. As he is always keen to do, he provides commentary on world issues of the day. We also get his thoughts on Canada, the 2007 Presidents Cup in Montreal and the choice of Mike Weir to take on Tiger Woods in singles, the choking factor in golf, the faults he sees in Jordan Spieth's golf game, how he's been like a teenager during self-isolation, what he expects when the PGA TOUR comes back, the charitable impact of golf, and the Masters being moved to the Fall. In the balance of the show we preview some of the bets available for the TaylorMade Driving For Relief skins game coming up this weekend, the return of the Korean LPGA Tour, how bad would we play with persimmon woods, and the "controversy" of Vijay Singh playing on the Korn Ferry Tour. Scott challenges Stefan with some trivia based on the 2010 PGA TOUR Media guide, we talk about the backswing in the Tip of the Week, and the MailBag brings us questions about when we first broke 80, how many times we think Mike Weir will win on the Champions Tour, what we have learned from golf, and what we think of Costco's new entry in the putter market. Gary Player Twitter Instagram: Flagstick Scott Stefan Twitter: Flagstick Scott Stefan Facebook: @Flagstick