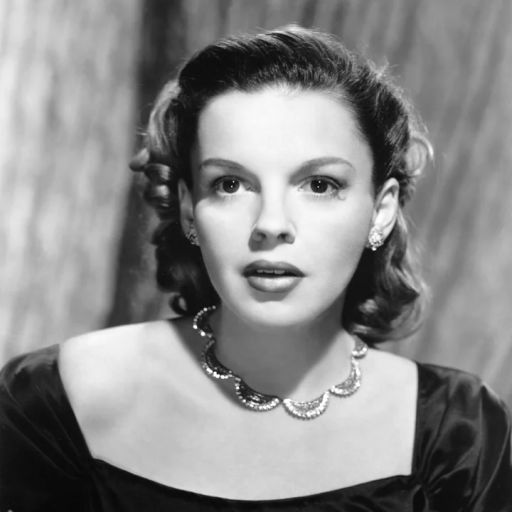 An amazing singer and actor, from the "Yellow Brick Road" and into our hearts in the Golden Days of Radio.

The Valley of the Dolls Podcast

I am joined in conversation with friend and fellow Judy Garland enthusiast Benn Garner. We look at the film teaming of Mickey Rooney and Judy Garland.  Our views on these films as a group and general conversation on this topic. HUGE resource other than the films themselves would be John Frickie's book "Judy: A Legendary Film Career" --- This episode is sponsored by · Anchor: The easiest way to make a podcast. https://anchor.fm/appSupport this podcast: https://anchor.fm/valleyofthedolls-pod/support

Get out your blue gingham and picnic basket, and start harmonizing because in this episode Kelin and Leah will be discussing the tumultuous and harrowing life of the iconic Judy Garland.

Oscar Lavant, Ken Carpenter, the Lou Bring Orchestra and Al Jolson welcome Judy Garland as their guest on this Kraft Music Hall variety show from 1948. Intro to track gives background information on Al Jolson and his career.This track will be found in the Playlist "Variety - Comedy - Music" on this podcast.

John Florence Sullivan was known professionally as Fred Allen.  His Network radio show, "The Fred Allen Show", ran from 1932–1949 and it was that show that made him one of the most popular and forward-looking humorists in the Golden Age of American radio. You will notice why he was so popular when you hear his voice. A twelve year old girl captured the hearts of the world when she sang "Somewhere Over The Rainbow", in the 1939 classic, "The Wizard of Oz.  Judy Garland will live forever; and on this edition of Jailhouse Radio she sings her best remembered songs. Grady arrives with stories that you will remember for a long time. Enjoy!

The Valley of the Dolls Podcast

This is a deep dive into Judy Garland's body of work on television during the later part of her career.  A factual audio essay.   I will be joined in conversation with friend and fellow Judy Garland enthusiast Benn Garner toward the end of the show. Research material for this episode listed below. Sanders, C. S (1990).  The Judy Garland Show: Rainbow's End. Morrow Frickie, J (1992).  Judy Garland World's Greatest Entertainer.  Little, Brown and Company Schechter, S (2002) Judy Garland: The Day-by-Day Chronicle of a Legend.  First Taylor Trade Publishing Frickie, J (2010) Judy Garland: A Legendary Film Career.  Running Press Frank, G (1975) Judy.  Fletcher &amp; Son  --- This episode is sponsored by · Anchor: The easiest way to make a podcast. https://anchor.fm/app Support this podcast: https://anchor.fm/valleyofthedolls-pod/support

Richard Skipper sits down to chat with John Meyer to discuss Judy Garland. John Meyer's songs have been performed by Shirley Bassey, Lily Tomlin, Madeline Kahn, Eartha Kitt, Linda Lavin and, most prominently, Judy Garland. His memoir, Heartbreaker, (Kensington, 2006), details the dramatic eight weeks he spent with Garland. In October of 1968, John met Judy Garland, then at the tail end of her career. She embraced both John and his song, I'd Like to Hate Myself in the Morning. The pair embarked on a tempestuous romance, at the end of which Judy performed four of John's numbers on national TV, including the ballad It's All For You and the melancholy Christmas song, After the Holidays. John detailed the adventure in a memoir, Heartbreaker. Holidays was subsequently recorded by Margaret Whiting and Paula West. Linda Eder performs It's All For You in her act as well.https://www.amazon.com/Heartbreaker-Memoir-Garland-John-Meyer/dp/0806527544

Welcome to LEGEND WORSHIP this week! Get ready for an exciting Queer history lesson with reigning Miss Hell's Kitchen, and NYC's premiere Judy impersonator: Gloria Swansong (@gloria_swansong)! She teaches us about Lypsinka, Jim Bailey, and the legend that is Judy Garland. Gloria's pick for peak Judy is Meet Me in St. Louis, and not Wizard of Oz, surprising us all! Where do you start with someone so mythological as her? Gloria recommends the "Battle Hymn of the Republic" from the Judy Garland show. You will be changed. We then dive into some questionable artistic choices regarding race and the institutionalized racism that led Judy to those choices. If people want to cancel her, Gloria asks, "how can you cancel someone who's dead?" Lol. Gloria then expounds on the connection, or lack thereof, between Judy's death and the Stonewall Riots. But if she was still alive, Gloria, and all of us, would love to see her on Broadway. One of her many unfulfilled dreams. Can you imagine her as Harold Hill? We love to see it! Or a Judy-Lizzo Collab. Can you imagine? We can. Come worship with us!IG/Facebook: @gloria_swansongIG/Twitter/Venmo: @allenstarby IG: @divaworshipBlack Lives Matter.Black Trans Lives Matter.Ableism is Bullshit.Drink Water.Wear a mask.Vote for Biden/Harris 2020!

In Judy Garland's Judy at Carnegie Hall (Bloomsbury Academic, 2020), Manuel Betancourt explores what makes Judy Garland’s landmark album great, and why it holds such a central place in queer culture.A hit when released in 1961 (it was the first album by a woman ever to win the Grammy award for Best Album), Judy at Carnegie Hall quickly came to occupy a central place in the gay imaginary. And yet by 1967 characters in the play The Boys in the Band would mock Judy fandom as the height of outdated cliché.What accounts for Judy Garland’s strange temporality, somehow always so ten years ago? Why is there such an intense association between Garland and nostalgia, and between Garland and nostalgia’s twin, failure? Why can we accept Judy Garland as a comeback kid but not as a success?Betancourt’s book explores these questions and more in a deep dive into the nature of queer fandom.Manuel Betancourt is a writer based out of Los Angeles. He earned his Ph.D. in English Literature from Rutgers University, USA.Andy Boyd is a playwright based in Brooklyn, New York. He is a graduate of the playwriting MFA program at Columbia University, Harvard University, and the Arizona School for the Arts. His plays have been produced, developed, or presented at IRT, Pipeline Theatre Company, The Gingold Group, Dixon Place, Roundabout Theatre, Epic Theatre Company, Out Loud Theatre, Naked Theatre Company, Contemporary Theatre of Rhode Island, and The Trunk Space. He is currently working on a series of 50 plays about the 50 U.S. states. His website is AndyJBoyd.com, and he can be reached atandyjamesboyd@gmail.com. Learn more about your ad choices. Visit megaphone.fm/adchoicesSupport our show by becoming a premium member! https://newbooksnetwork.supportingcast.fm

The Last Hours Of... Judy Garland

Autopsy: The Last Hours Of…

She was one of the world's most beloved stars and her legendary career in film and stage spanned generations. As a child actor, she rose to superstardom as “Dorothy” in the musical-fantasy The Wizard of Oz. But as well as being famous for her tremendous voice and acting talent Judy Garland was known for her stormy love life and for abusing prescription drugs. On June 22, 1969, Judy’s fifth husband found her dead in the bathroom of their rented home in London. Her sudden death sparked rumors and speculation and now Forensic Pathologist, Dr. Michael Hunter, examines her medical records to reveal what sent this legendary Hollywood superstar over the rainbow at just 47 years old. Next week, Dr. Hunter re-examines the murder of Motown master, Marvin Gaye. We’ll add a new Autopsy podcast every Wednesday. Like what you hear and want more true crime and mystery? Go to https://www.reelz.com/podcasts/