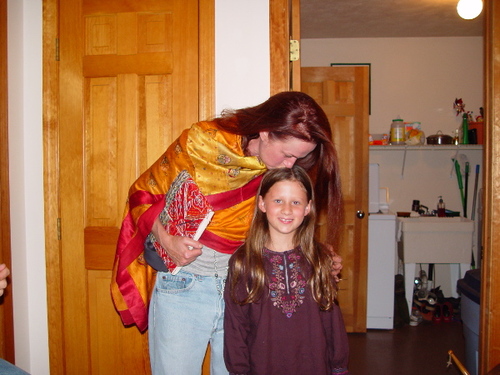 Heather Watts picks up in this week's episode with "the rest of the story," so to speak. She tells us of how her family has expanded in the last few years and the miraculous story of families within families, coming together to create a whole new family! :) That's a riddle, so if you want the answer, you'll just have to listen to how the Watts's journey is continuing on, always with their Princess, Delilah, in the foreground, shaping the context of their lives. This story is going to bless your socks off, so be prepared!

The Legacy of Princess Delilah with Heather Watts

Heather Childress Watts tells us about the journey she and her husband are on as the parents of a Princess. Their daughter, Delilah, was born prematurely and fought a hard battle to live to see her first birthday. After Princess Delilah left this world to live in Heaven, not too long after turning one, Heather and Jeff set about to memorialize "D" in a way that would bless others for years to come. The Princess Delilah Foundation ministers to nurses, doctors, NICU and PICU families and patients, college students, families grieving lost children, and many, many more. Delilah's life and spirit lives on in the work that her parents are doing to give back to others and Heather's convinced that D sends signs of her approval from above. This is such a special family and this is a very special episode. Enjoy Heather, Jeff, and Delilah's story and please consider donating to the Princess Delilah Foundation.

This week we are joined by distinguished Balanchine ballerina, Heather Watts.  Immediately noticed for her stunning physicality and the individuality of her interpretations, Watts was one of the last ballerinas to inspire Balanchine, having roles created for her in ballets like ‘Walpurgisnacht’ and danced many of his existing masterpieces such as ‘Concerto Barocco,’ ‘Symphony in C,’ and ‘Theme in Variations.’ She has devoted her life after the stage to keeping Balanchine’s works alive, whether it’s giving lectures on the way Balanchine’s worlds related to art and world events at the time of their creation, or coaching her roles for the many artists of the Vail Dance Festival. In 2012, Watts was awarded an honorary doctorate from Hunter College.  She is married to former New York City Ballet Principal Dancer, Damian Woetzel.  Today we talk with Heather about her early career, how she caught Balanchine’s eye, the way his death impacted her life, and why coaching his ballets and influencing the next generation is so important to her. The post (60) Heather Watts, Balanchine Ballerina appeared first on tendusunderapalmtree.com.

Ms. Watts was an established Balanchine dancer. Her career and place in history is very significant. Frankly, I was a little nervous dialing the phone on this one. After all, this is Heather Watts! However, it took less than 30 seconds for that feeling to fade once we connected. I really like Heather Watts. I love her honesty. I love her stories of Mr. B, and I also admire how candid she was when she discusses her story. Ballet Initiative Podcast RSS

It's safe to say, this was an easy conversation. In fact, we spent over two hours talking about art and life. Because of the length, I thought it would be wise to make break the conversation down and present it in two parts. Enjoy. Ballet Initiative Podcast RSS

Heather Watts (2), 1-30-11: "Influences of social behavior on survival and reproduction in birds and mammals"

Heather Watts (1), 1-30-11: "Influences of social behavior on survival and reproduction in birds and mammals"

Patterns of survival and reproduction are known to be influenced by prevailing environmental conditions. In this talk, I will draw from my research on gregarious mammals and birds to examine how the social environment can affect these two components of fitness. First, I will discuss how social status, group size and maternal support influence survival and reproduction in the spotted hyena (Crocuta crocuta), a large carnivore that lives in complex social groups much like those of cercopithecine primates. Second, I will present my recent research investigating the effect of social cues on reproductive timing in the pine siskin (Spinus pinus), a nomadic North American finch with a flexible breeding schedule. Throughout, I discuss what these findings tell us about the evolution of behavior in these species.