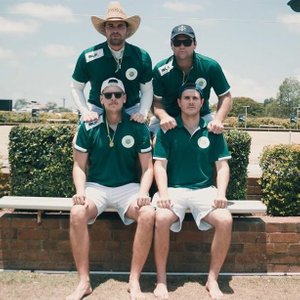 On this episode of the all new Rich Redmond Show, Tully Kennedy and Kurt Allison join Rich and Jim to discuss pretty much whatever comes up, and it’s a lot!  Tully, Kurt and Rich have been playing together since 1999, a majority of the time backing their boss Jason Aldean, in what has become one of the most trailblazing and defining Country bands out there.    With the Rich Redmond show being a free-flowing conversation, naturally other topics came up:  - Guilty pleasures - Tully likes controversy and Rich gets uncomfortable - Overrated bands - Jim’s surprising revelation to Tully Follow Kurt and Tully: @tullykennedy @kurtallison The Rich Redmond Show is about all things music, motivation and success. Candid conversations with musicians, actors, comedians, authors and thought leaders about their lives and the stories that shaped them.  Rich Redmond is the longtime drummer with Jason Aldean and many other veteran musicians and artists. Rich is also an actor, speaker, author, producer and educator. Rich has been heard on thousands of songs, over 23 of which have been #1 hits!  Rich can also be seen in several films and TV shows and has also written an Amazon Best-Selling book, "CRASH! Course for Success: 5 Ways to Supercharge Your Personal and Professional Life" currently available at https://www.amazon.com/CRASH-Course-Success-Supercharge-Professional-ebook/dp/B07Q3STMJV/ref=sr_1_1?keywords=rich+redmond&amp;qid=1566754984&amp;s=gateway&amp;sr=8-1 Follow Rich: @richredmond www.richredmond.com Jim McCarthy is the quintessential Blue Collar Voice Guy. Honing his craft since 1996 with radio stations in Illinois, South Carolina, Connecticut, New York, Las Vegas and Nashville, Jim has voiced well over 10,000 pieces since and garnered an ear for audio production which he now uses for various podcasts, commercials and promos. Jim is also an accomplished video producer, content creator, writer and overall entrepreneur.  Follow Jim: @jimmccarthyvos     www.jimmccarthyvoiceovers.com